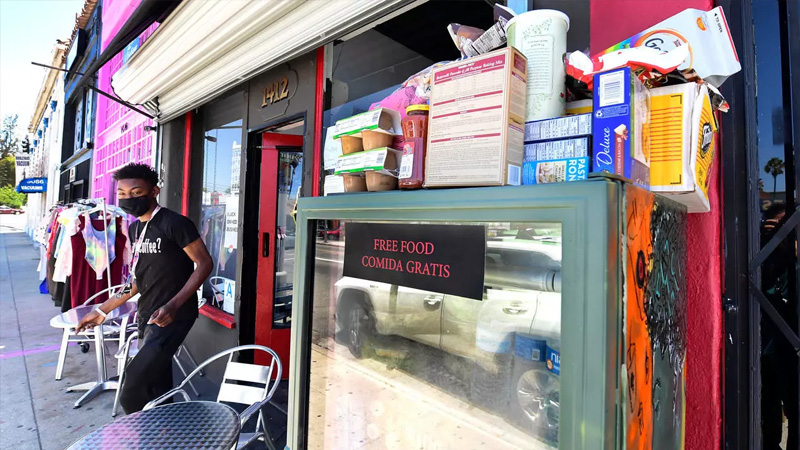 On a sidewalk in Los Angeles stands a shiny, clean refrigerator packed with milk, fruit, vegetables, chicken and other food, marked clearly as free for the taking.

It is one of several “community refrigerators” that began to appear this month on the streets of Los Angeles, which has very high levels of homelessness and is now hit hard by economic woes brought on by the coronavirus pandemic.

The fridges are unlocked, no one watches over them, there are no forms to fill out or lines to wait in, and people can take as much food as they want. They are open every day, 24 hours a day.

A sign in English and Spanish says “Free food.”

“If you need to empty the fridge, no one will judge you. If you need to take one tomato, or you only put one tomato in there, do it,” said Marina Vergara, an organizer for LA Community Fridges, which has set up seven of the appliances and has plans for more.

“I thought the concept of having these community fridges up in neighborhoods all around the city would make, you know, just this kind of aid more accessible,” said Vergara.

The idea was inspired by a similar initiative in New York. Whoever needs food takes it, and those who can donate, do so, putting items in the fridge at any time of day or night.

The appliances are painted colorfully and bear upbeat messages, and beside them are boxes with non-perishables such as canned goods. Some people even leave shoes and clothing.

“This fridge belongs to you & everything inside,” says a sign on a refrigerator in Mid City, which like many parts of Los Angeles is a mix of modern houses and condos spawned by gentrification and older, more modest homes.

Restaurants, supermarkets, NGOs and neighbors chip in to keep the fridges filled.

“It’s been overwhelming. It has been nothing but love,” said Danny Dierich, manager of a cafe called Little Amsterdam, which provides the electricity for a fridge right outside.

“People come by every single day. They put goods in the fridge, they bring stuff in. It’s just a beautiful thing, man,” he told AFP.

“We’re living in a very unusual time you know. Businesses have been shut down, people losing their job,” he said. “People got to feed their families.”

California was one of the first states to impose lockdown orders and was a model for handling the virus outbreak, but now it has again closed parts of its huge economy because of a surge in infections, mainly in Los Angeles county. Business has halted for bars, barber shops, indoor restaurants and others, a move that will increase unemployment in the county, which was a staggering 21 percent at the end of May.

Local authorities, NGOs, churches and schools have opened up food banks and soup kitchens for those most affected. Vergara, who started the fridge project with an organization called Reach for the Top, which helps the homeless, said there are immigrants without papers who are afraid to go to food banks for fear of being detained and deported. Others are simply too ashamed to tap those resources.