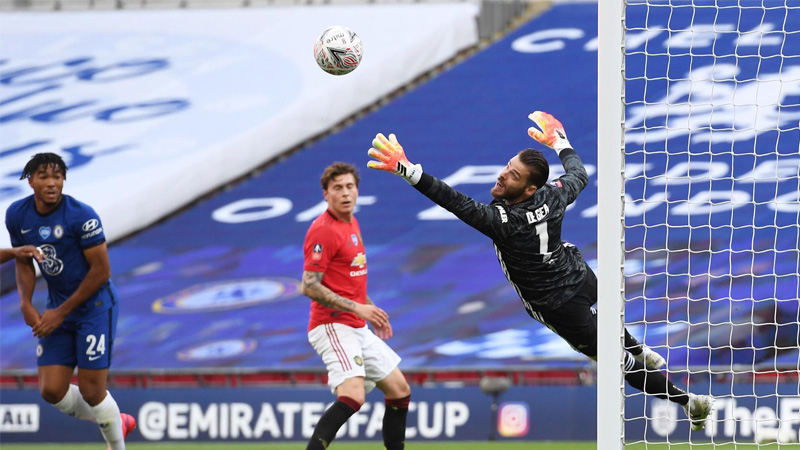 LONDON: Chelsea beat Manchester United 3-1 on Sunday to book their place in an all-London FA Cup final, helped by two glaring errors from goalkeeper David de Gea and an own goal by Harry Maguire. Chelsea, who face rivals Arsenal in the Aug. 1 showpiece, had lost to United three times this season but dominated the match and took control with goals either side of halftime from Olivier Giroud and Mason Mount. Chelsea manager Frank Lampard was delighted with the discipline of his team, who ended United’s 19-game unbeaten run.

“People ask a lot at this time of the year about mentality and character and our team was full of it today,” he told the BBC after the match at an empty Wembley, the national stadium’s gates locked because of the COVID-19 pandemic. United were forced into a change at 0-0 late in the first half when Eric Bailly was carried off after clashing heads with fellow defender Maguire, United manager Ole Gunnar Solskjaer bringing on Anthony Martial to create more attacking threat. But it was Chelsea who took the lead 11 minutes into first-half stoppage time when Giroud flicked a cross by captain Cesar Azpilicueta at De Gea who failed to get enough of a hand on the ball to stop it spinning over the line.

Chelsea doubled the lead a minute after the restart when Mason Mount pounced on a poor pass by Brandon Williams to shoot from the edge of the box. It looked like De Gea would make a comfortable save but he could only steer the ball into the net. “I know David is a very mentally strong keeper and person but of course he knows he should save that one. But that’s part of football,” Solskjaer said, adding that the Spaniard would remain the club’s first-choice keeper. United struggled to create any chances to narrow the deficit and Chelsea sealed the victory when Maguire, under pressure from Antonio Rudiger, connected with a cross from Marcos Alonso with his studs and diverted the ball past the hapless De Gea.

United scored a consolation goal when Bruno Fernandes converted a penalty in the 85th minute. Solskjaer was left to rue his decision to drop his usual FA Cup goalkeeper Sergio Romero and put De Gea in the starting team despite errors by the Spain keeper earlier this season. By contrast, Lampard kept faith with his number two keeper Willy Caballero who has been limited mostly to cup appearances for Chelsea this season. The Argentine had a quiet afternoon with a tired-looking United rarely threatening. The win leaves 42-year-old coach Lampard, the club’s record goalscorer, on course for a positive first season in charge of Chelsea who look on course to qualify for the Champions League, possibly alongside United, as well as reaching the FA Cup final.