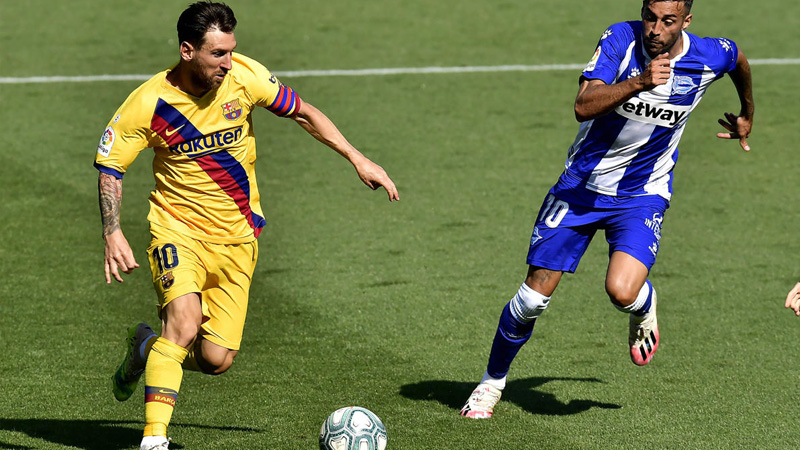 BARCELONA: Lionel Messi finished as top scorer in La Liga for a record seventh time after netting twice as dethroned champions Barcelona ended their disappointing campaign on a high with a resounding 5-0 win at Alaves on Sunday. Barca finished the season second in the standings on 82 points, five behind newly-crowned champions Real Madrid who drew 2-2 at Leganes later on Sunday. Alaves came 16th on 39. Teenage forward Ansu Fati put Barca in front midway through the first half after the visitors hit the woodwork three times, while Messi and strike partner Luis Suarez further stretched their side’s lead before halftime. Defender Nelson Semedo hit the fourth early in the second half before Messi struck again, ending the campaign on 25 league goals, four more than second-top scorer Karim Benzema of Real Madrid. The Argentine, who also finished as top marksman for a fourth consecutive season, eclipsed the benchmark he previously shared with the late Telmo Zarra but said he would have rather have won the league. Barca’s captain had made headlines on Thursday following his angry post-match interview after the 2-1 loss to Osasuna, blasting the team as weak and inconsistent, also appearing to criticise the running of the club. But he was in a happier mood after the dominant performance against Alaves, saying the team felt more confident ahead of next month’s Champions League last-16 second leg game with Napoli, which they host with the score tied at 1-1.