Like Darfur, East Timor, Kashmiris must get right to self-determination, Afridi to UN 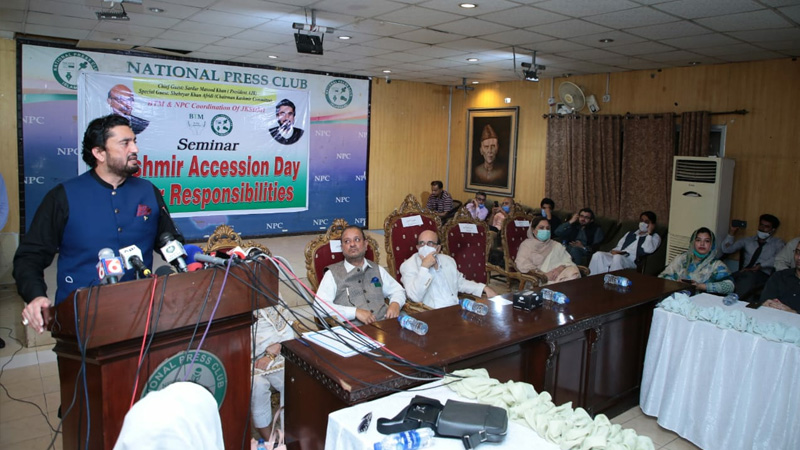 Addressing a seminar at National Press Club to mark Kashmir Accession Day, Shehryar Afridi said the new laws were a part of Indian plan to bring demographic changes in the IoJK in a bid to artificially turn Muslim dominated Kashmir into a Hindu majority territory.

“This is a nefarious design cooked up to violate the United Nations Security Council resolutions. The world needs to act now,” said Afridi.

“Under this sinister design, thousands of Indian labourers have been brought for construction near the army Cantonment. Massive constructions are going around several Indian-occupying Army camps in Kashmir. Thousands of residential flats are being constructed at transit points in Srinagar for Indian Army troops. This is all in violation of the UN resolutions and its conventions,” he added.

He said that India is violating International law by settling Indians in the UN-recognized disputed territory. The world must take note and warn India of its implications in the region, he demanded.

Afridi said the UN must pursue its own resolutions on Kashmir to hold a plebiscite in the occupied territory, failing which it would lead UN towards the fate of League of Nations.

Afridi also pointed out that thousands of Indians have been granted citizenship rights and being shifted in IoJK.

“Over the last few weeks, tens of hundreds of non-natives are being ferried to Kashmir and are being settled in far off areas near Indian-occupying army camps. This has increased the anxiety among Kashmiris,” Afridi added.

He said despite the oppressive occupation by India, Kashmiri people have not given up their desire for accession with Pakistan and Kashmiri people, expressing their love for Pakistan and are still waving Pakistani flags in Indian-occupied Kashmir and raising slogans of “Long live Pakistan”.

He said Kashmiris are determined to continue their struggle for the accession with Pakistan and independence from India.

“The Government of Pakistan, while upholding its principled position, continues to provide political and diplomatic support to the Kashmiris,” he said.

He demanded from the UN to pursue its incomplete agenda on Kashmir and ensure the right to self-determination (RSD) of Kashmiris.

He said while Kashmiris on both sides of the Line of Control and around the world are celebrating Pakistan Accession Day, Indian occupation forces are inflicting innumerable atrocities in the Indian-occupied Kashmir, and the unarmed Kashmiri people are fighting the dangerous weapons of the Indian-occupying army with mere rocks.