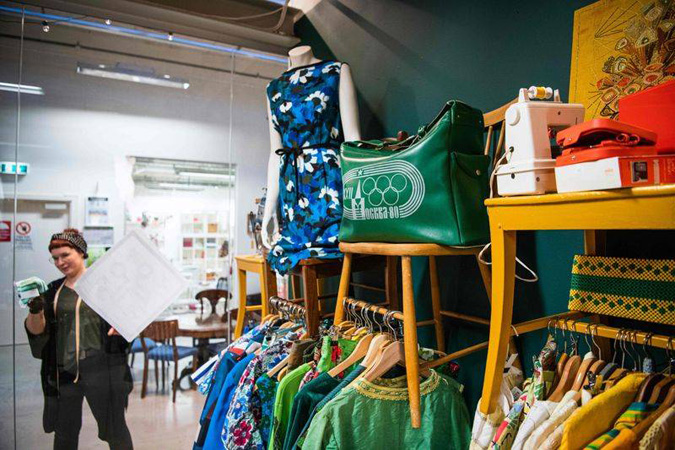 Not content with the average neighbourhood thrift store, a city in Sweden has opened a whole shopping mall dedicated to giving pre-owned items new life.

The mall, located an hour’s train ride west of Stockholm in the city of Eskilstuna, consists of 13 stores and covers 5,000 square metres (54,000 square feet), employing between 50 and 65 people.

It has been named ReTuna, a play on Eskilstuna, which began an effort to reinvent itself as an ecological city in the 1990s.

“We are traditionally an industrial town, we have had our difficulties and we thought we have to find some things that can build confidence and where we can take responsibility,” the city’s mayor Jimmy Jansson told AFP, adding that city leaders were now trying to develop it “into a modern industrial town”.

ReTuna, inaugurated in 2015, was named “the world’s first shopping mall designated for repaired, recycled and restored items” by the Guinness Book of World Records in 2020.

Some way from the giant shopping malls of major cities, the complex still attracts some 250,000 to 300,000 visitors a year, according to Anna Bergstrom, who was in charge of ReTuna until early 2020.

Spread across two floors the boutiques sell used tech gadgets, books, children’s toys and home goods, as well as a slew of other products.

“You can basically do all kinds of shopping here that you do in regular stores: furniture, clothes, flowers, sports articles, building materials, almost everything,” Bergstrom said.

The mall, where a slight hint of the signature smell of second-hand clothing reigns, also offers a one-year course in the design of recycled products.

Buying second-hand has seen a surge in Sweden, where “kopskam” (buying shame) and “flygskam” (flight shame) are weighing on the consciences of Swedes.

Sweden is aiming to be an ecological leader by becoming carbon neutral by 2045.

By then Eskilstuna wants to capture more CO2 than it emits and be independent of fossil fuels.

Equipped with a state-of-the-art waste-sorting centre, the city already recycles or transforms most of its waste into energy.

But the green image has some blemishes. Cars fill the city’s streets and car parks, including the ReTuna car park.

Although the buses in the city centre already run on biogas, “there is still a lot to be done to reduce carbon dioxide emissions,” Jansson, the city’s social democratic mayor for the last 10 years, admitted.

Eskilstuna – home to Volvo’s construction equipment division and stainless steel giant Outokumpu of Finland – adopted a “Climate Plan 2020” in 2012 to become greenhouse gas neutral by the end of the decade.

In 2016 a list of “50 environmental promises”, ranging from the development of renewable energies to bicycle paths, was also adopted.

Earlier this year, the opposition Green party noted that there are “a number of goals that have not been met.”

Citing worries over whether Eskilstuna would be able to reach the climate goals, they called on the city’s leaders to step up their efforts.