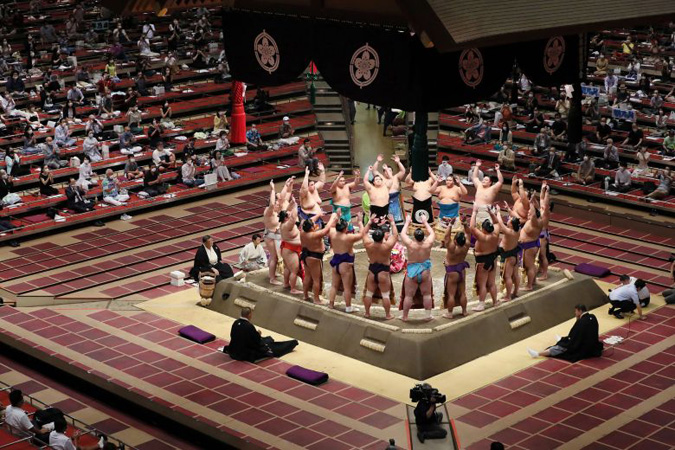 TOKYO: Face-masked sumo fans sitting apart from each other cheered on their favourite wrestlers in person for the first time in five months on Sunday, as the delayed July Tournament got underway in Japan. Due to the coronavirus pandemic, a tournament originally planned for May was cancelled, while March’s Spring Grand Tournament in Osaka was held behind closed doors. The July meet was delayed by two weeks after being moved from its usual location in Nagoya, in central Japan, back to the capital to reduce the risk of infection posed by travel. The Japan Sumo Association (JSA) is letting in about 2,500 fans a day during the two-week tournament at Ryogoku Kokugikan, which has a capacity of 11,000. Fans have already attended baseball and soccer matches in Japan under government guidelines allowing up to 5,000 people to attend sporting and other events since July 10. The JSA has prohibited wrestlers from going outdoors unless necessary and to restrict training to their home stables. On Sunday, grand champion Hakuho opened his account with a win, while fellow grand champion Kakuryu fell to the dirt to start the tournament with a loss. Spectators attending the tournament must wear masks and sit individually in seating boxes that usually accommodate four people. In May, a 28-year-old sumo wrestler became infected with the novel coronavirus and died from multiple organ failure.