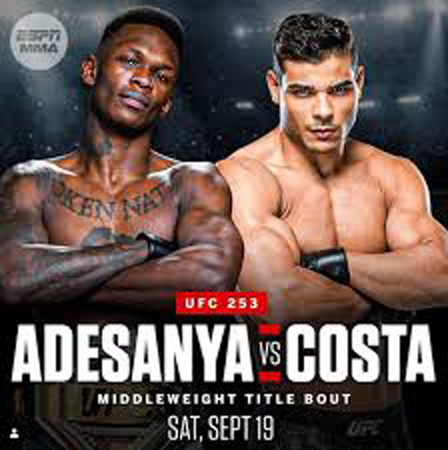 LONDON: The 185-pound UFC title fight between Israel Adesanya and Paulo Costa might not have a location but it now has a date as it will take place Sept. 19. Adesanya (19-0) will be defending his title against Costa (13-0) at UFC 253, with the fight expected to take place at either Las Vegas or Abu Dhabi, according to multiple reports. A lightweight title fight between Khabib Nurmagomedov and Justin Gaethje was originally targeted for Sept. 19, but ESPN reporting that fight could be moved to later this year. “The fight is on folks!” Costa tweeted on Saturday. According to ESPN, it will be just the second time in UFC history that a pair of undefeated male fighters will meet for an undisputed title. Rashad Evans and Lyoto Machida met at UFC 98 in 2008 for the light heavyweight title, with Evans successfully defending the belt.