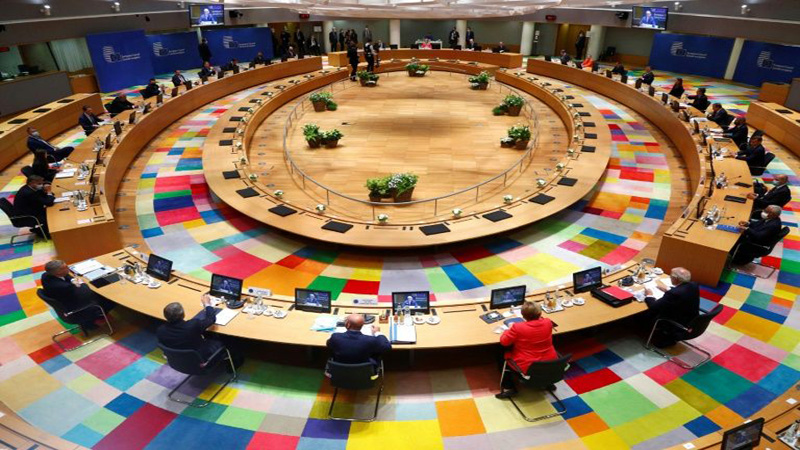 EU leaders return for a tense third day of summit talks on Sunday amid a clash over the scale and rules of a huge planned coronavirus economic rescue package.

For two days, the Netherlands and its “frugal” allies have resisted the pleas of Germany and France, the bloc’s most powerful members, to agree a plan to lift the countries hardest hit by the pandemic — most notably Spain and Italy.

The Dutch had demanded that member states wield a veto over national bailouts to ensure countries carry out labour market reforms, and Austria, Finland, Denmark and Sweden want to see the up to 750-billion-euro package of loans and subsidies cut down to size.

But, after two days of meetings between various groups of the 27 leaders, EU Council President Charles Michel was left working through the night to draw up a compromise that could be satisfactory to all when the leaders reconvened in a plenary session at noon (1000 GMT) on Sunday.

“The consultations are at an important stage,” said a member of the German delegation. “It cannot yet be said whether there will be a solution tomorrow, but it is worth continuing to work.”

A French diplomatic source said that President Emmanuel Macron and German Chancellor Angela Merkel refused pressure by Rutte and his allies to cut the grants in the scheme to below 400 billion euros ($460 billion).

The offer was made in a meeting that pitted Macron and Merkel against Rutte and the other leaders of his “Frugal Five” allies — Austria, Denmark, Sweden and Finland.

Speaking to reporters, Rutte acknowledged that his French and German counterparts left the late-night meeting looking irritated. But “this wasn’t only because of me,” he said.

“Tomorrow we continue,” he said. “I haven’t heard any ultimatum”.

Europe is in the throes of a massive recession and leaders are trying to approve a plan that could quickly send EU cash to countries hit the hardest, most notably Spain and Italy.

Michel, who chairs EU summits, was obliged to propose a fresh plan after previous versions were refused by the Netherlands on the grounds that they gave away too much cash as grants, instead of lending it as loans.

Rutte is also wary about the plan’s governance and insists that national governments get a veto on the spending plans of governments receiving cash from the Brussels package.

Underlying his concern is the reputation of Spain and Italy for lax public spending in the minds of voters in northern Europe, and Rutte wants them to reform their labour and pensions rules. “We’re in a stalemate, it’s very complicated, more complicated than expected,” Italian Prime Minister Giuseppe Conte said.

In a concession to Rutte’s demands, Michel’s latest plan includes a “super emergency brake” that gives any country a three-day window to trigger a review by all member states of another’s spending plans.

An official from a non-frugal state insisted this was not a veto, and it appeared late on Saturday that the idea may have survived, sources said.

But the frugal countries were still not happy and were seeking more cuts late into Saturday.

The Michel proposal would have kept the total recovery budget at 750 million euros, but shift the balance slightly from grants — down from 500 million to 450 million — to loans, which rise from 250 million to 300 million, according to a document seen by AFP.

“The ratio of grants versus loans simply has to be different,” Chancellor Sebastian Kurz told reporters.

To further entice Austria, the Netherlands and the other “frugals” — Sweden and Denmark — Michel promised to hike the rebates they get on their EU contributions.

“That’s not quite enough for us. We want a bit more, but the direction is a good one,” Kurz said.

But the “frugals” are not the only problem. What EU officials call the “Rule of Law” issue will also be a stumbling block.

“No political pre-conditions can be accepted,” said Zoltan Kovacs, a spokesman for Orban.

Here, countries will defend traditional targets of EU spending, such as farming to France and development projects in eastern Europe, that others would like to see go to fighting climate change or technology.