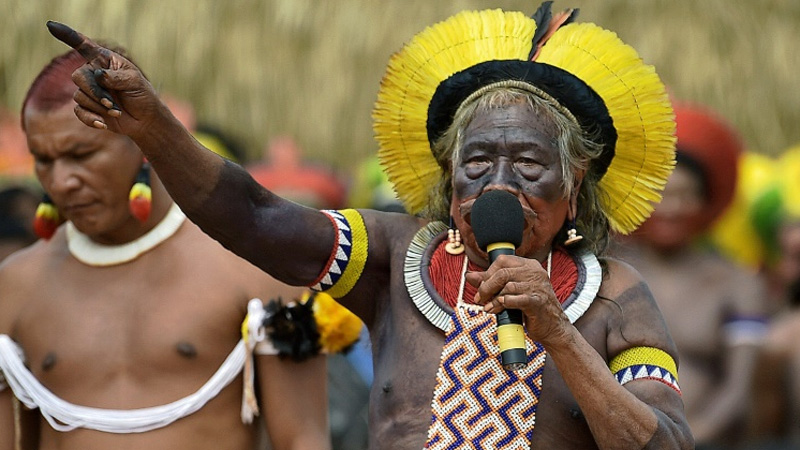 Indigenous leader Raoni Metuktire, one of the Amazon rainforest’s best-known defenders, was transferred between hospitals Saturday due to weakness and a “worsening” state of health, one of the medical facilities said.

Raoni, a chief of the Kayapo people in northern Brazil, was likely suffering from a digestive hemorrhage, said Santa Ines Hospital, in the small town of Colider in Mato Grosso state, where he was admitted Thursday.

Raoni was already showing “signs of improvement” including a rise in blood pressure after being administered first aid, according to Dois Pinheiros Hospital in the city of Sinop, where he was transferred.

The hospital said it would conduct exams beginning Sunday to detect whether Raoni might be suffering from a gastric ulcer, estimating that he would remain at the facility “at least three days.”

The transfer was made by plane after Raoni, now in his 90s, appeared to be in a “worsening condition, with an increase in weakening and a deterioration of renal function,” Santa Ines Hospital reported in a statement.

It said that since it “did not have an intensive care unit, he was transferred with some urgency” just in case “his clinical condition worsens.”

Known for his colorful feather headdresses and the large disc inserted in his lower lip, Raoni has traveled the world raising awareness of the threat posed by destruction of the Amazon.

The president of French NGO Planete Amazon reported that Raoni had been in a depressed state following the loss of his wife of more than 60 years, Bekwyjka, who died in June following a stroke.

He “started to be sick 15 days ago with fever, diarrhea and vomiting” and was very dehydrated, said Gert-Peter Bruch, the association’s leader.

Raoni tested negative for coronavirus, Bruch said, even as many indigenous people in the Amazon have contracted the illness as it sweeps across the country.

Brazil, the world’s second hardest-hit country, is nearing 80,000 deaths from the coronavirus.

Another iconic indigenous leader in Brazil, chief Paulinho Paiakan, died in June after contracting the virus.

The same month, in an interview with AFP, Raoni said Brazilian President Jair Bolsonaro “wants to take advantage of this disease” to eliminate indigenous people.

Bolsonaro has faced criticism for pushing to open protected Amazon lands to farming and mining, which he argues would benefit indigenous communities.

Indigenous leaders and activists are skeptical, however, and have condemned the president for some of his comments, including that indigenous people “are becoming more and more human, just like us.”