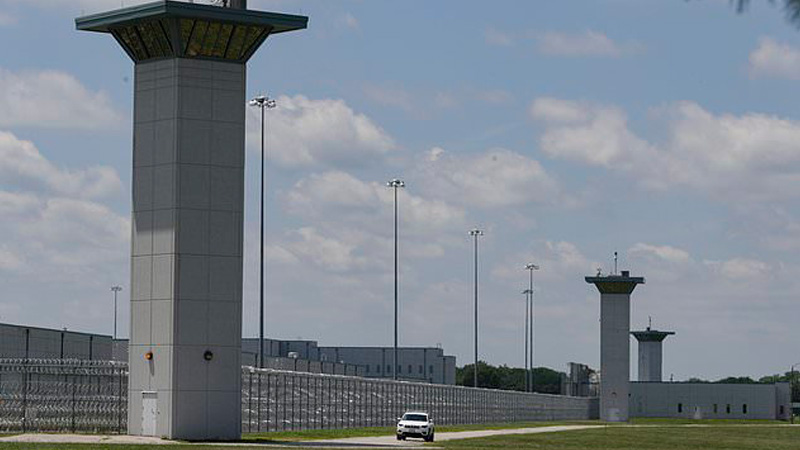 Daniel Lewis Lee, a condemned man and convicted murderer, was asked if he wanted to make a final statement from the execution chamber, with its institutional green-tiled walls and plate-glass interior window, moments before he too would die.

He did. He leaned his head up and we locked eyes.

Those were his last words. He said them to me.

Lee’s execution, one of two that I witnessed this past week at the Federal Correctional Complex in Terre Haute, Indiana, played out slowly, after painstaking hours of final, futile legal appeals, before prison officials administered a lethal injection and the federal government carried out capital punishment for the first time in almost two decades. A third execution came later in the week.

Before the lethal injection for Lee, there had been a lot of waiting. Prison officials searched me extensively each time I arrived, then sent me back to my hotel during the legal maneuvering, only to call me back to the maximum-security facility.

As part of a small group of other reporters, I was an official witness to Lee’s death, one that took place in the middle of a pandemic.

Lee, who was convicted of killing an Arkansas gun dealer, his wife and young daughter in the late 1990s, was scheduled to be executed Monday at 4 p.m. EDT.

But there would be a long wait as his legal appeals made their way to the Supreme Court. Along with other reporters, I was lodged inside a former bowling alley that was now a prison staff training center. It was guarded by heavily armed prison officers. We were all wearing blue surgical masks. Our temperatures were taken.

We could carry only identification into the prison as we loaded into two unmarked white vans that took us a short distance down “Justice Drive” to the penitentiary building for a security screening.

Inside, correction officers outfitted in full protective gear – N95 masks, face shields, gloves and paper gowns – told us we’d be going through the equivalent of a souped-up airport screening. They even took my glasses to X-ray them.

But then came another delay. Officials told us to grab dinner, so we did, then returned to the prison and waited. By midnight, all of us left again for our hotels nearby.

At 2:10 a.m. the Supreme Court ruled the execution could proceed. About a minute or so later, a Bureau of Prisons official was on the phone saying the execution was scheduled for 4:15 a.m.

We rushed back to the prison. The clock in the van read 4:16 when we hopped out and headed into the execution chamber.

Lee was already there – strapped to a gurney. We were brought into a small witness room. There were plastic chairs facing the window, a notepad, a pen, small bottle of hand sanitizer and a single sanitizing wipe on each seat. A correction officer pulled the large metal door closed and a booming click echoed through the room. We were locked in.

The curtain was shut, but I could hear noises coming from the other side of the wall. We couldn’t make small talk. A man, albeit a convicted murderer, who was supposed to die soon could probably hear us.

We were all uncomfortable. A reporter next to me scribbled “legal issue?” on his notepad and gestured to me. “I guess so,” I replied.

There was no clock in the room. We lost track of how long we had been in there. Eventually someone asked if anyone knew what time it was. When a correction officer replied it was 6:10 a.m., there was a collective gasp of surprise.

At 7:46 a.m. the curtain began to rise slowly. By that time we´d been locked in the room with Lee just on the other side of the glass, strapped in, for nearly four hours.

There he was. His arms were strapped down and a light blue sheet covered most of his body. I was annoyed with one of the reporters who was moving around vying for a better view. Of a man’s death. It bothered me somehow, even though we were all there. A US marshal inside the room with Lee picked up a black phone hanging on the green tiled wall.

“This is the marshal inside the execution chamber,” he said. Washington headquarters was on the other end. The marshal asked if there were any legal impediments that would prohibit the execution. He listened, then said, “I understand there are no impediments.”

And then Lee said those last words, looking right at me.

He rested his head back down and the drug quickly did its deadly work. His lips turned blue. His chest stopped moving. He was pronounced dead.

I rushed back to my computer and filed my story.

It wouldn´t sink in until later that I had just watched a man die. My face was one of the last he saw. I´ve been a crime reporter for years, but this felt different. It was clinical. It was like watching someone go to sleep.

And there wasn’t much time to dwell on the experience, because another execution was scheduled for the next day.