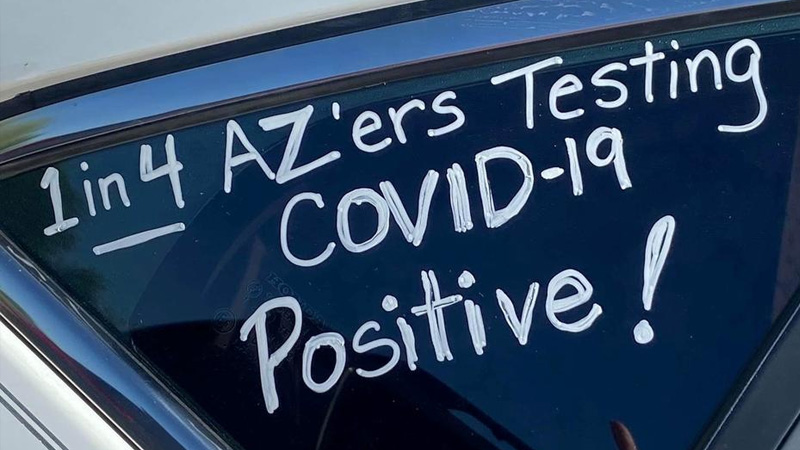 Arizona third-grade teacher Stacy Brosius has been called a “liberal socialist Nazi” and a “whiner and complainer” for leading car-based protests to delay in-person schooling, but she says she’s doing it to save lives in a pandemic.

Inspired by Black Lives Matter demonstrations, hundreds of Arizona teachers like Brosius are putting on red t-shirts they last wore in a 2018 strike and driving around cities in cars daubed with slogans like: “Remote learning won’t kill us but COVID can!”

In Arizona, teachers want Republican Governor Doug Ducey to push the start of in-person school to at least early October after a beloved educator died of COVID-19 teaching summer school and statewide hospitalizations and deaths spiral.

At stake, Arizona teachers say, is the safety of the state’s 1.1 million public school students and 20,000 teachers.

“We don’t want any children to get this from us, because as a teacher, I don’t want to go to any of their funerals,” said Brosius, 47, who is not prepared to send her three children back to school.

Arizona has been hit hard by the virus this summer as its 7-day average of new cases has gone from 500 at the end of May to more than 3,000 in July, while hospitals’ intensive care capacity, according to most recent data from Arizona Department of Public Health, stood at a nearly 90 percent this week.

Ducey on Thursday said he would not be swayed by politics, adding he would be comfortable sending his children back to school, as did the state’s health chief, Cara Christ.

With slogans like “freedom over fear,” Arizona parents are demanding their children have the option of in-person learning. A “REOPEN our SCHOOLS” protest is set for July 30 in Phoenix in support of Ducey’s mandate that in-person classes resume Aug. 17, after the Deer Valley Unified School District delayed their start until Oct. 14.

“All we want is our choices back,” said protest organizer Christina DeRouchey, the mother of four school-age children.

Teachers wearing “Red for Ed” t-shirts – the same garb they wore during a successful week-long pay strike two years ago — are planning a much larger motor march July 22 to circle the state capitol and governor’s office.

The red shirts are a symbol of nationwide strikes by educators over the past few years that some believe may be rekindled this fall. Arizona teachers are not alone in their protests. Teacher unions across the nation, especially those recently entangled in labor battles, are organizing to become active participants in when and how to re-open schools. The United Teachers Los Angeles have won an indefinite delay to in-person learning. Others in more conservative states such as Florida are trying to push back classroom start dates and boost funding for personal protective equipment.