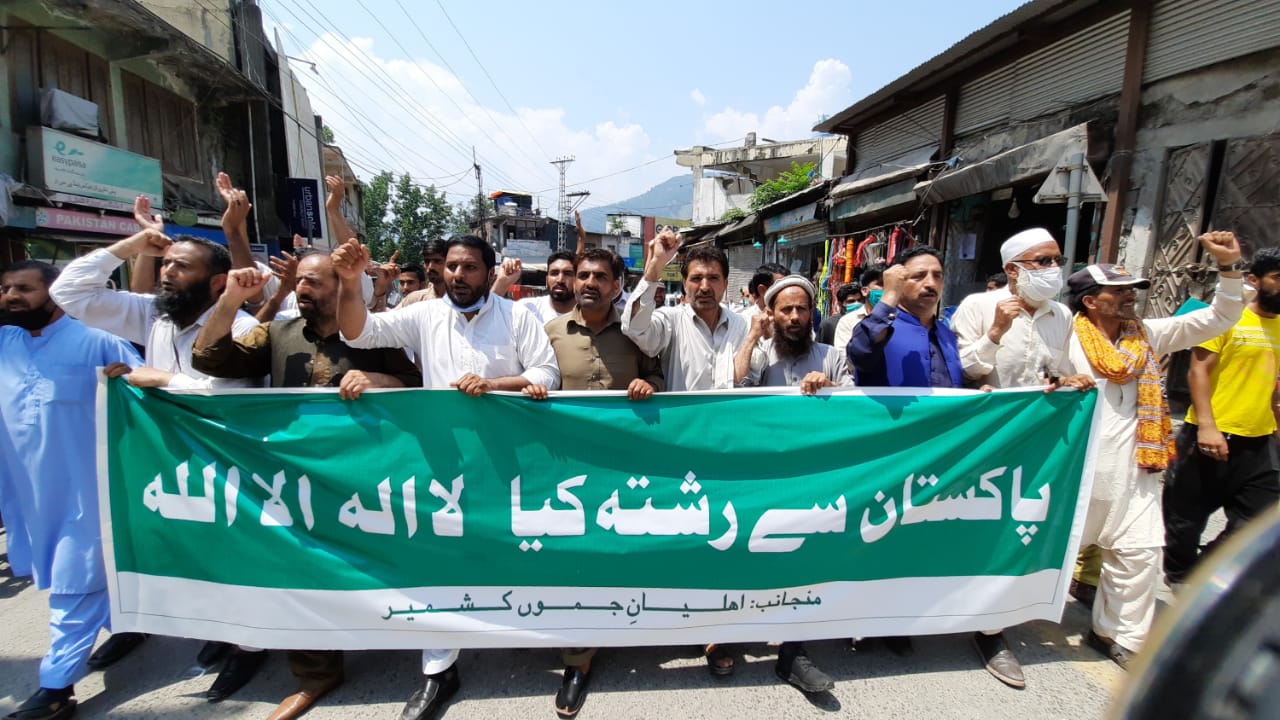 Muzaffarabad: “Pakistan Accession day” was commemorated on both sides of Line of Control here on Sunday.

Large number of People including youth and elders gathered at Bank road Muzaffarabad and signed the national flags with their blood and staged a rally.

Enthusiastic slogans against India and in favor of the independence of Kashmir were voiced by the people on the occasion and National anthems of Pakistan and Azad Kashmir were also heard.

According to the details, the Kashmiri leadership passed a resolution in Srinagar on July 19, 1947, to ratify the unanimous resolution of Pakistan’s accession and to reaffirm its commitment to the everlasting historical and ideological ties with Pakistan.

Speakers on the occasion said that Hamidullah Khan had presented a resolution of accession to Pakistan at a historic meeting of the Kashmiri people’s representative organization “Muslim Conference” on July 19, 1947 at Sardar Muhammad Ibrahim Khan’s house in Srinagar and it was unanimously adopted.

They reiterated that British rulers had given freedom to all states under the formula of partition of the subcontinent to which the people of the state of Jammu and Kashmir could join any country they wished.

The speakers said that on October 27, 1947, India invaded Kashmir and occupied a large part of the state.

“The Indian government and Hindu extremists inflicted innumerable atrocities on the Muslims in Jammu and Kashmir but the people of the state still struggling for plebiscite to annex with Pakistan”, they added.

The speakers said that today the Government of India is illegally granting citizenship (domiciles) to thousands of Indian families within the internationally recognized disputed state and occupational forces are engaged in acquiring land for military use.

Speakers voiced that unarmed civilians living in occupied Jammu and Kashmir are facing the dangerous and lethal weapons of the Indian Army only with stones as they resist for freedom.

People of Jammu and Kashmir seek United Nations and the international community attention to listen their voice.

The speakers said that Kashmiri people celebrate Pakistan Accession Day on July 19 every year expressing their love for Pakistan and commitment of the political future, “Even today we are endorsing the decision of these dignitaries with our blood, the future of the people of the state is not India but the Islamic Republic of Pakistan.”

Speakers maintained that for the last 70 years, the people of the state have come out of their homes and raised their voice for their independence, rights and political future.

The speakers termed the continued silence by the United Nations and the international community as a tragedy and a threat to peace in the region.

They added that it is the responsibility of the government of Pakistan (GoP), people, political, religious parties and the authorities to play their role for liberation Jammu and Kashmir from the clutches of India, adding that for this GoP needs to start a comprehensive, solid and speedy plan.