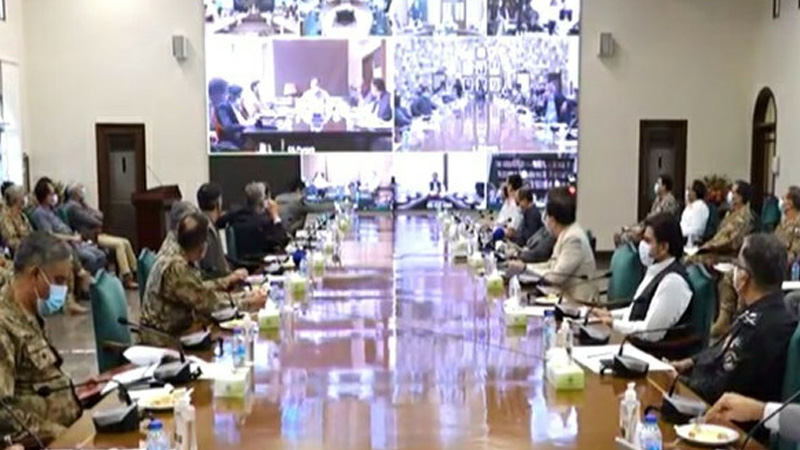 The National Command and Operation Centre (NCOC) on Saturday directed the provinces to ensure strict compliance of standard operating procedures (SOPs) on Eid-ul-Azha and Muharram management along with encouraging public adherence to safety guidelines.

Chief Minister Sindh Syed Murad Ali Shah while hosting the NCOC exclusive session welcomed the NCOC central team and said that the role of NCOC in coping with the pandemic was significant and sessions of NCOC in provincial capitals would enhance coordination and prove to be helpful for provincial management in fighting against the pandemic. However, at the outset of coronavirus outbreak the provincial governments were facing issues related to hospitals’ facilities for COVID treatment which were collectively resolved by the federal and provincial governments.

He added that the health facilities were in a better position and the there was need to take preemptive measures to manage Eid-ul-Azha, Muharram and Rabi-ul-A weak.

Speaking on the occasion, Asad Umar said the purpose of holding special sessions in provinces was to make consultations on core issues with provincial governments and also acknowledge their efforts in fight against COVID. He added the wearing of masks and SOPs compliance were crucial in cattle markets to contain coronavirus pandemic along with a monitoring mechanism in place . “Decline in COVID patients deaths and cases does not mean to get complacent and avoid following safety protocols as it will further deteriorate the situation.”

He added that the doctors, paramedics, administration and law enforcement agencies of Sindh including all provinces had rendered meritorious services that deserve appreciation.

Federal Minister for Interior Brig (R) Ejaz Ahmed Shah said all provinces were engaged in the process of devising SOPs and implementation was also ensured. He added that the guidelines were shared with the provinces where punitive action was launched against illegal cattle markets.

Brig (R) Ejaz Ahmed Shah mentioned that a strong mechanism of control would also be made in place to ensure strict compliance of SOPs.

He added that the guidelines for Muharram were also underway and would be shared with the provinces.

The Forum lauded the test and tracing mechanism of Sindh and also acknowledged that it had tremendously implemented the test, trace and quarantine (TTQ) Strategy.