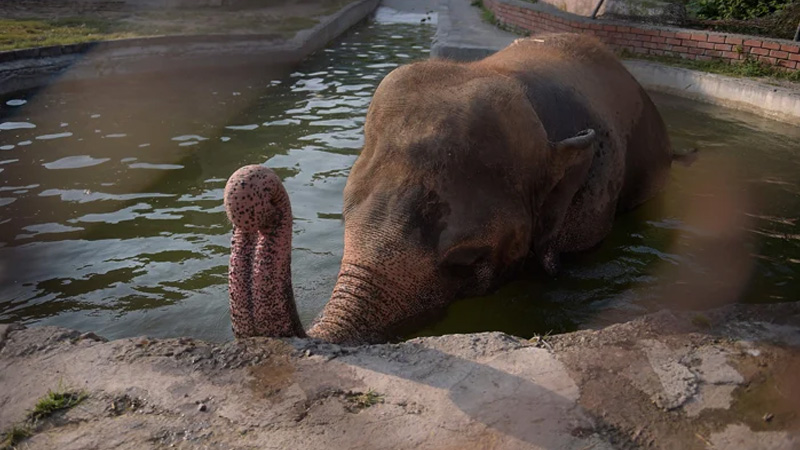 The federal government has decided to send Kaavan, the only elephant at the Islamabad Zoo, to Cambodia, it informed the Islamabad High Court on Saturday.

Kaavan and his poor living conditions were the subject of debate in Pakistan and around the world with people calling for better treatment for the elephant.

A petition garnered over 200,000 signatures after it emerged he was being chained at the Islamabad Zoo. The 35-year-old Asian elephant is said to be suffering from “mental illness” and without a better habitat his future is bleak even if a long-promised new mate finally arrives, experts have said.

The government is working on arrangements for Kaavan’s transfer, the wildlife secretary told the court.

The court was hearing a case on the transfer of animals from the Marghazar zoo on Saturday. Chief Justice Athar Minallah asked what progress had been made to transfer Kaavan and other animals from the zoo. The court had given the ministry a month to transfer the animals but the deadline passed with no action.

The secretary replied that the government was working to find someone to ship the elephant abroad. It had considered sending the animal to Nepal, Sri Lanka or Cambodia and finally decided that the transfer to Cambodia was easier and cheaper.

When Justice Minallah asked how long it would take to transfer the elephant, the secretary said they are asking the finance ministry for money for visas etc. “It will take four weeks,” he added.

Justice Minallah then asked what became of the alligators at the zoo. They have been transferred to a safe place, the secretary replied. But they should be transferred to some coastal area in Sindh, the chief justice remarked, adding that animals can only survive in their natural habitat.

“If an animal was born in Multan and sent to Alaska, how could it survive?” he asked.

The world is taking interest in the government of Pakistan’s treatment of animals, said Justice Minallah, adding that humans should use their strength to keep weaker creatures safe, not imprison them.