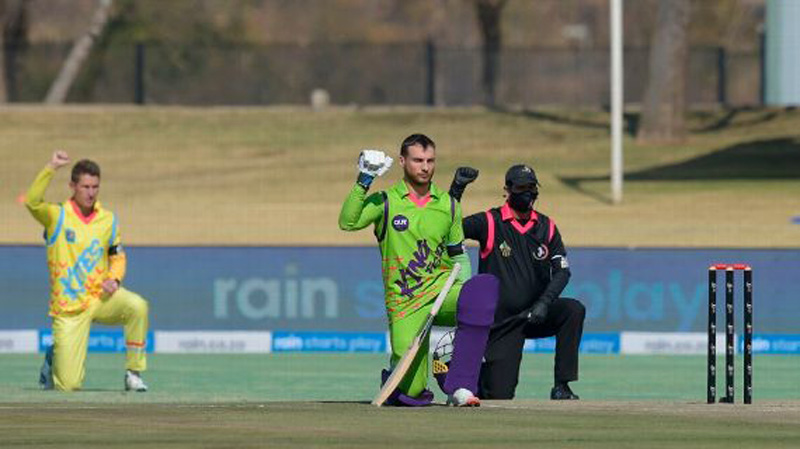 PRETORIA: After days of discussion around the Black Lives Matter issue, South Africa’s elite cricketers showed a united face against racism by taking a knee at Centurion’s SuperSport Park ahead of the 3TC match on Saturday. All 24 participating players, support staffers, CSA officials including Graeme Smith, the director of cricket, and members of the SuperSport commentary team –– Makhaya Ntini among them –– joined in as South Africa staged its first live cricket match in four months. The gesture, in support of the Black Lives Matter movement, came after a fortnight that showed up the faultlines in South African cricket. On the eve of the match, Smith, Faf du Plessis and Dwaine Pretorius confirmed that they would take the knee, and joined three other white South African cricketers –– Anrich Nortje, Rassie van der Dussen and Marizanne Kapp –– in supporting Lungi Ngidi’s call for players to join the rest of the world in making a stand against racial discrimination.

With no spectators allowed at the ground, television coverage showed the players standing in a half-circle facing the vacant presidential suite at SuperSport Park to sing South Africa’s national anthem Nkosi Sikelel’ iAfrika. The players then took their positions on the field, with Temba Bavuma’s Kites bowling first, to Reeza Hendricks’ Kingfishers. As the umpires called time, with the words “we are ready”, the Kites players –– batsmen Janneman Malan and Hendricks –– and the umpires took a knee on the field. The rest of the teams and everyone else involved stood around the outside of the boundary and did the same, their right fists raised in solidarity.