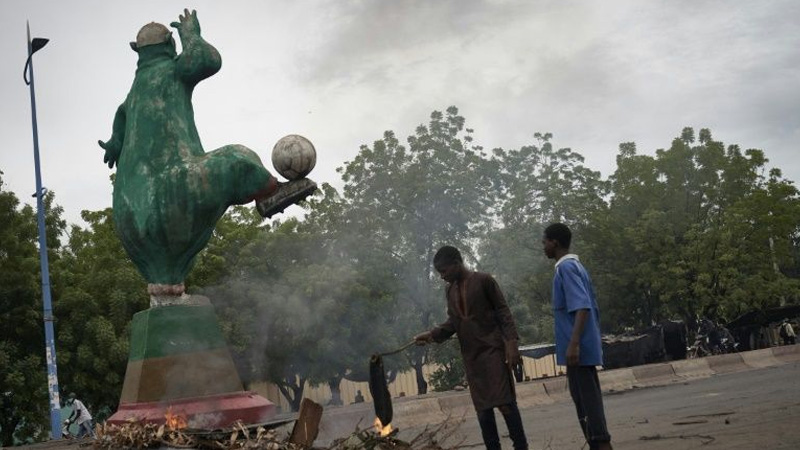 Mali’s protest movement on Friday pressed on with a demand for embattled President Ibrahim Boubacar Keita to quit, as international mediators tried to defuse the crisis in the insurgency-riven country.

At a press conference in the capital Bamako, the June 5 Movement also insisted that the West African state’s parliament be dissolved, and called for a “republican transition” from the current government.

The move came during soaring political tensions in Mali, which a delegation from the 15-nation West African regional bloc ECOWAS is trying to calm.

The June 5 Movement has triggered a show-down with the government with unflinching demands that Keita resign over his perceived failures in tackling the dire economy and Mali’s eight-year jihadist conflict.

Three days of clashes between protesters and security forces ensued, leaving 11 dead and 158 injured, according to an official tally, in the bloodiest bout of political unrest in years.

The June 5 Movement — a disparate alliance of political, social and civil-society leaders — has stuck to its core demand and rejected conciliatory gestures from the president.

ECOWAS mediators met Keita on Friday, according to a statement from the presidency.

They also met influential imam Mahmoud Dicko — who is viewed as the de facto leader of the movement despite not being a formal member.

“We really spoke as brothers and Africans and I hope that, inshallah (God willing), something will come out of this that will give Mali back its greatness,” he said.

One of the June 5 Movement’s leaders Ibrahim Ikassa Maiga restated the demand that Keita resign at the press conference on Friday.

He also read from a statement entitled “note on exiting the crisis,” which urged the international community to lean on the president to step down.

Mali’s allies and neighbours are keen to avoid the fragile Sahel nation of some 20 million people sliding into chaos.

Swathes of the country lie outside of government control because of a jihadist insurgency that began in the north in 2012, and has since claimed thousands of lives and driven hundreds of thousands from their homes.

ECOWAS mediators, who have been in Mali since Wednesday, continued to hold meetings between the warring parties.

On the agenda is the March-April parliamentary election, the disputed outcome of which many analysts say is the root of the current crisis.

The United Nations high commissioner for human rights on Friday also urged both sides in Mali to show restraint, warning of escalating tensions.

Keita appears unlikely to offer his resignation, however, despite the opposition’s insistence.

Mali’s Prime Minister Boubou Cisse condemned the deaths of protesters in an interview with French media on Thursday, but added that Keita’s resignation was “inconceivable” since he had been elected.

The 75-year-old president came to power in 2013 to hopes that he would turn the country around.