According to the partition of the formula of 1947 of dividing British India into Pakistan and India, all the princely states were required to join either Pakistan or India; depending on their population’s affinity and their physical contiguity. Jammu and Kashmir had an 80 per cent Muslim majority population and, being contiguous to Pakistan, was supposed to join Pakistan. 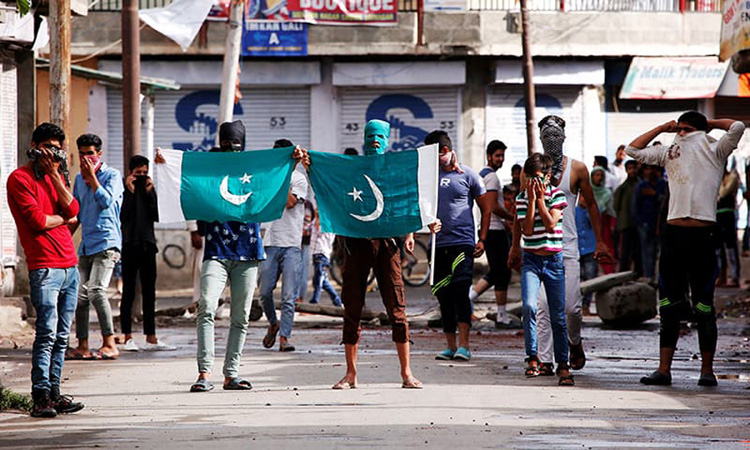 Following the announcement of the partition plan, as published by the Kashmir Media Service, on July 19, 1947, genuine representatives of the majority of Kashmiris unanimously passed the resolution of Kashmir’s Accession to Pakistan during a meeting of the All Jammu and Kashmir Muslim Conference at the residence of Sardar Muhammad Ibrahim Khan in Aabi Guzar area of Srinagar.

The resolution stated: “This convention of Muslim Conference has reached the conclusion that geographical conditions, 80 per cent Muslim population, important rivers of Punjab passing through the state, language, cultural, ethnic and economic relations and contiguity of the state with Pakistan make it imperative to merge with Pakistan.”

The decision of July 19, 1947, was a testimony to the fact that the people of Kashmir had linked their future with Pakistan.

But the Hindu ruler, Maharaja Hari Singh of Jammu and Kashmir, announced to keep the state independent. In response, the Muslim majority population of the state revolted against his decision and started its liberation struggle. Indian leaders offered military assistance to Maharaja Hari Singh, provided he acceded the state to India. Thus, under duress, Hari Singh is said to have acceded Jammu and Kashmir to India under a controversial Instrument of Accession, which has, so far, never been made public by the Indian Government.

In the meantime, the people of Jammu and Kashmir had liberated a vast part of the state, which was named as Azad Jammu and Kashmir. Sardar Ibrahim became its first president. Then, India landed its army in Srinagar on October 27, 1947, based on the so-called accession deal. To check the unlawful intervention and advance of the Indian army, Pakistan army also moved to Azad Jammu and Kashmir and a war was started between Pakistan and India.

In December 1947, India approached the UN Security Council (UNSC) to seek its help to settle the dispute. The UNSC passed resolutions in 1948/49, which asked for the cease-fire and holding a plebiscite under its supervision, to enable the people of Jammu and Kashmir to decide through their vote whether they wanted the state to join Pakistan or India. Resultantly, the war was stopped and the part of the state under the occupation of the Indian army was called the Indian Occupied Jammu and Kashmir. With the end of the war, the people of Jammu and Kashmir started waiting for the implementation of the UNSC resolutions.

However, after having frustrated out of India’s politics of deceiving the Kashmiris’ by failing all the UNSC efforts to hold a plebiscite in Jammu and Kashmir, and also avoiding bilateral discussions on Kashmir with Pakistan, since 1989, the people of Occupied Jammu and Kashmir have started their peaceful freedom struggle. And India has tried to crush the freedom struggle by deploying more than 700,000 security forces and committing countless atrocities in the state.

As part of their freedom struggle, to display their resolve to India and the world that they are determined to join Jammu and Kashmir to Pakistan, the people of the state on both sides of the LOC and abroad commemorate July 19 every year as Kashmir’s Accession to Pakistan Day, through peaceful processions; holding seminars/conferences, marching up to the UNMOGIP office in Pakistan and displaying the Pakistani flags on their houses.

The decision of July 19, 1947, was a testimony to the fact that the people of Kashmir had linked their future with Pakistan

India is exploiting its strategic partnership with the US, the UK and France and its friendship with Russia to crush the Kashmiris’ freedom struggle by equating it with terrorism and committing genocide in Occupied Jammu and Kashmir; using more than 1100,000 security troops with total impunity. Except for China, the aforementioned powers have hardly ever pressed India for stopping its HR violations in Kashmir.

Crossing all the limits, on August 5, 2019, the Modi government abrogated Articles 35-A and 370 of India’s constitution and took away the autonomy of Jammu and Kashmir; dividing the state into two Union territories. To preempt Kashmiris’ reaction, India has also clamped lockdown/curfew in the Kashmir valley, apprehended/ jailed all the Kashmiri leaders/youth and Indian forces are carrying out genocide in the Kashmir valley.

When Pakistan referred the matter to the UNSC, its veto power members, just asked Pakistan and India to resolve the Kashmir dispute through bilateral talks. Except for China, no power condemned Indian actions. India was not pressed to lift the curfew, release the Kashmiri leaders/youth and end the Kashmiris’ genocide in the Kashmir valley.

Hoping that the world powers will pressure India to reverse its August 5, 2019 actions in Kashmir, end its curfew, free the leaders and end the genocide to maintain regional peace, Pakistan has exercised restraint. However, if the international community does not rein in India and the Modi government continues with its violations across the LOC and genocide in the Kashmir valley, the situation can lead to a disastrous war between two nuclear powers.

Given the above, on July 19, 2020, (this year), the people of Jammu and Kashmir, on both sides of the LOC, will commemorate the Kashmir’s Accession to Pakistan Day with full dedication to displaying their determination that despite heavy odds. They are going to intensify their freedom struggle till they liberate the state to join Pakistan.

The writer is a former Consultant and Research Fellow of Islamabad Policy Research Institute (IPRI), Islamabad