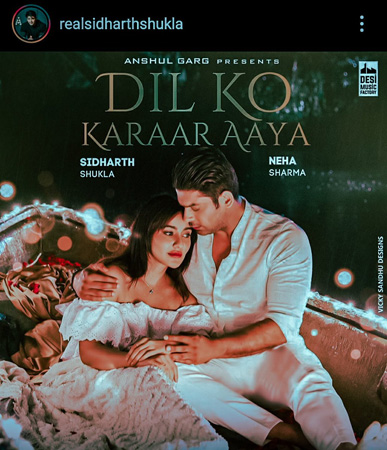 The first look poster of the song has been released online and the buzz is palpable. Fans are loving their reel chemistry and this explains why #FirstLookOfDilKoKaraarAaya is trending on Twitter.

The duo looks fab together in the poster. The song is a part of an album titled ‘Sukoon’. It has been sung by Rajat Nagpal, who has also given the music. A special thanks to Neha Kakkar has been mentioned on the poster cover.

Lyrics are penned by Rana and the video is directed by Sneha Shetty Kohli.

Sidharth was last seen in song ‘Bhula Dunga’ with a friend and former ‘Bigg Boss 13’ contestant Shehnaaz Kaur Gill. The track was a chartbuster with over 74 million views on YouTube as of now.