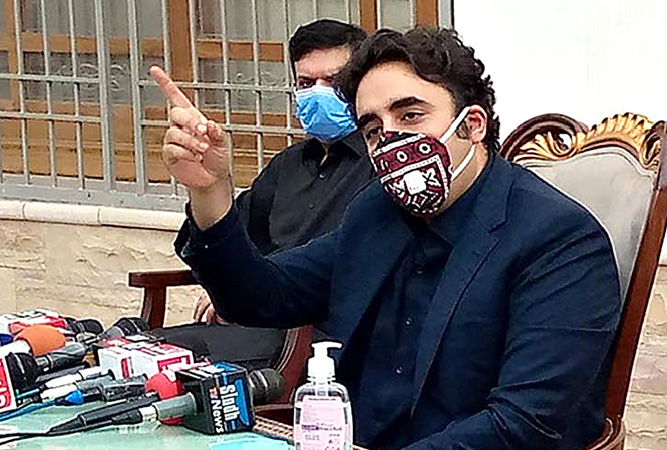 The ordinance the PPP chairman was referring to is ‘The International Court of Justice Review and Reconsideration Ordinance, 2020’ which had been enacted on May 20 after the International Court of Justice’s decision to allow Jadhav to appeal for mercy. Under the ordinance, a review petition may be submitted to the Islamabad High Court within 60 days of the ordinance coming into effect. The 60-day time limit ends on July 19.

“The ordinance was introduced to facilitate Kulbushan. Despite the expiry of the ordinance’s time period and the regular meetings of the Senate and National Assembly, it was never presented [in the House],” Bilawal told a press conference in Sukkur. He demanded that PTI inform the nation as to why the ordinance was not presented in either the Lower or the Upper House.

Bilawal, calling for the government’s accountability in the matter, warned that ‘this will not be forgiven’ and that it was another reason for the incumbent prime minister to step down from his position. “Had the PPP introduced such an ordinance, the media would have made our lives miserable and the Difa-e-Pakistan Council would have staged a sit-in in Islamabad,” he said.

The PPP chairman said that PTI had apprised the people of its party policy before coming into power. “Today when people are fighting for their lives, the government is enacting an ordinance for Kulbhushan behind our backs,” he added.

Talking about incarcerated PPP leader Khursheed Shah, he said that the party stalwart had strived for democracy and the rule of law his entire life. “Today as Shah faces injustice, PPP hopes that the judiciary – for which PPP has struggled and its workers laid down their life – will give us justice and grant bail to Shah,” he said. “Till a person’s conviction, all the rights [granted in the constitution] should be given,” he said, adding, “If rights are not granted, then it will [naturally] be perceived that the Opposition is being subjected to political victimisation.”

Highlighting PML-N leader Rana Sanaullah’s speech in the National Assembly on NAB and PTI’s relationship, Bilawal said that Sanaullah had accused the ruling party of blackmailing the anti-graft watchdog. “How can [federal] ministers and their channels blackmail NAB to launch cases against political opponents or media owners,” he asked. “This is condemnable,” he added.

Prior to the media briefing, the PPP chairman took his outrage to Twitter and demanded answers and accountability, terming it another reason for Prime Minister Imran Khan to leave his seat. “What is this secret Kulbhushan Jadhav ordinance introduced by our selected govt without taking the country or parliament into confidence. Absolutely outrageous. We demand answers & accountability. Yet another reason why this PM must go,” Bilawal wrote on Twitter.