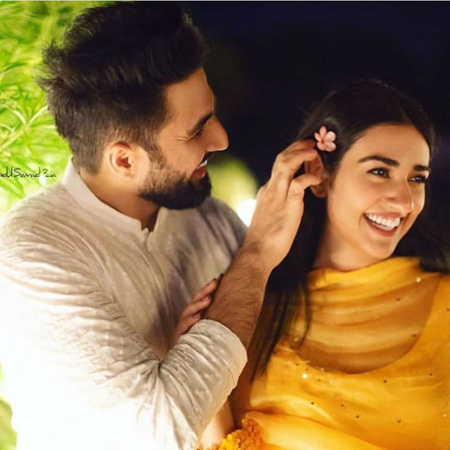 Sarah Khan and Falak Shabir got hitched in an ethereal nikkah ceremony held on Thursday. The newly-wed couple looked beautiful clad in traditional wedding attire as they beamed with joy at the start of their new chapter in life.

Pictures and video snippets from Sarah and Falak’s wedding ceremony have taken all over social media making fans gush over their adorable, PDA-filled exchange.

Looking at the bride and groom’s love-filled pictures, it seems as if they cannot keep their hands off each other.

In another video, Falak can be seen singing a song to Sarah while she blushes coyly.

Sarah announced her engagement to singer Falak on Wednesday evening, a few hours after which the couple officially kicked off their wedding festivities with a mayun ceremony.