Why cleaner air may be bad for your sourdough bread 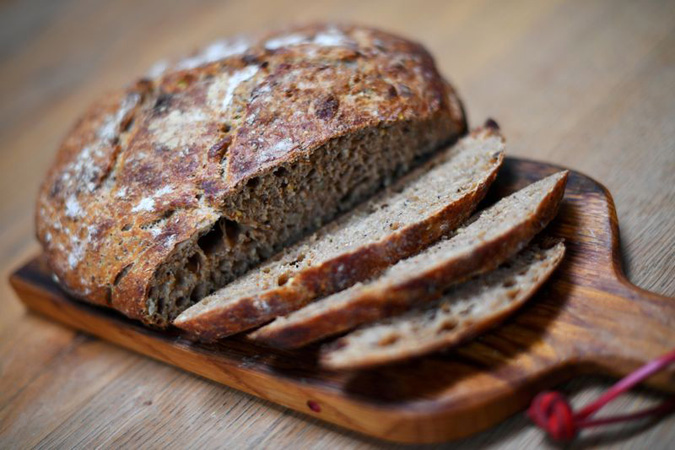 Less acid rain is good for the environment, but potentially bad for bread, cereals and pasta.

A decline in U.S. power plant emissions over the last 30 years means the air has less sulfur, a crucial nutrient for wheat and many other crops that researchers are now working to replace with fertilizer applications.

For decades sulfur seeped into the soil via acid rain, a toxic precipitation that is harmful to human health but helped crops and made for tastier bread.

Bread’s delicious structure is mainly thanks to the gluten in wheat. Gluten gives bread its elastic nature and allows pizza dough to be stretched and tossed in the air. But gluten is held together by sulfur-to-sulfur bonds. Without enough sulfur, bread has a harder crust and poor crumb structure — resulting in something more like a brick than a baguette.

In Kansas, the sulfur deficit is plainly visible each spring as wheat plants in some areas emerge from their winter dormancy and resume growing. Most wheat fields are green, but some have a distinctive yellowish tint, the result of new leaves emerging from the tops of wheat plants low on sulfur.

European farmers have been applying sulfur for years, after research in the mid-2000s showed sulfur-deficient wheat when combined with other ingredients in baking can form acrylamide, a chemical linked to cancer.

In the United States, sulfur deficiency “is more of an emerging problem,” said Mary Guttieri, a U.S. Department of Agriculture researcher who is studying sulfur and Kansas wheat. “It’s not been something that these farmers’ grandparents or even their parents needed to worry about.”

Adding sulfur on top of the common nitrogen, phosphorus and potassium fertilizers that U.S. farmers have applied for years, is a boon to fertilizer companies, but raises costs for growers at a time commodity prices have slumped due to trade tensions with China and years of overproduction.

“The sulfur application is usually not cost-prohibitive, but because of the way the markets are going right now, any amount of increased cost is going to be scrutinized,” said Ron Olson, an agronomist with The Sulphur Institute.

Sales of fertilizer products containing sulfur are on the rise, manufacturers say. Demand for ammonium sulfate, for example, has grown by 5% annually in the last decade in Canada and the United States, according to Canadian fertilizer maker Nutrien Ltd.

Nutrien this week released a new fertilizer that combines elemental sulfur with phosphate.

“As the amount of atmospheric sulfur deposited via rainfall steadily declines, additional sulfur should be added to the soil through fertilizer applications,” Cristie Preston, Nutrien senior agronomist, said in a statement

With lockdowns due to the coronavirus curbing air pollution globally, sulfur deficiency could become even more acute in the U.S. farm belt, soil scientists said, although the impact will likely pale in comparison to gradually reduced emissions over the last 30 years.

“It will have an effect, although it will be hard to measure,” said Jim Camberato, a soil scientist with Purdue University.

Data from the U.S. Environmental Protection Agency shows the amount of sulfur dioxide emitted into the air by power plants in the top wheat growing state of Kansas fell by 94% between 1990 and 2019. The Sulphur Institute, a trade group, attributes the decline to pollution control regulations.

Winter wheat in Kansas, the top U.S. producer of the food grain, has been negatively impacted by cleaner air.

“Over the years it has been leading to more and more symptoms of sulfur deficiency in the Kansas wheat crop,” said Romulo Lollato, a wheat production specialist with Kansas State University.

Farmers in the Plains and elsewhere withdraw sulfur from the soil each year by harvesting crops, while deposits from the air have also declined. Since about the year 2000, Kansas has been running a sulfur deficit, Lollato said. Similar deficits can affect rapeseed, alfalfa, corn and soybeans.

While U.S. air quality has improved significantly in recent decades, environmentalists are concerned about potential backsliding as President Donald Trump’s administration rolls back green regulations it views as a headwind to economic growth.

Farmers can prevent the problem relatively cheaply by adding sulfur to the granular or liquid forms of nitrogen fertilizer that they already apply. But low wheat prices in recent years have discouraged producers from adding any expenses to a crop that has not been profitable.

“I don’t think wheat growers, or anybody else, want to go back to what the air was before. The Clean Air Act (of 1970) has been a good thing,” USDA’s Guttieri said, adding, “It’s just something that we need to manage for, in our wheat production.”