Following international norms and laws under the Vienna Convention on Consular Relations, 1963, Pakistan has provided a consular access to convicted Indian spy Commander Kulbhushan Jadhav. This is a second counselor access to Indian naval commander Jadhav in 10 months. Besides the counselor access, Pakistan has granted a meeting session to the mother and wife and wife of Jadhav in 2017. According to a Foreign Office statement, “Two consular officers of the Indian High Commission in Islamabad were provided unimpeded and uninterrupted consular access to Commander Jadhav at 1500 hours”. Despite the flurry of meetings going on, the Indian side is mum on filing a review petition against their spy’s conviction, the concession offered by Pakistan through an ordinance promulgated on May 20. Earlier, Jadhav has refused to benefit from the legislation. Since his arrest on March 3, 2016 in Balochistan, Jadhav has been given an opportunity to defend himself in a court of law despite his confession of carrying out RAW-funded terror activities in Pakistan, especially in Balochistan. Indian refusal to take benefit from the ordinance will only harm its serving navy commander as the foreign minister Shah Mahmood Qureshi has said that “Pakistan remains committed to fully implementing the International Court of Justice’s (ICJ) judgement of July 17, 2019. It is hoped that India will cooperate with the Pakistan court in giving full effect to the said judgement”.

It is race against time as the review petition offer does not stand for ever. The time bound offer will lapse in two months – July 20. The Indian side has a chance to file an appeal in the Islamabad High Court against their spy’s conviction and avail an open trial chance. Perhaps, India is reluctant to fight the case in an open court because Pakistan has undeniable proof of RAW’s terrorism in Pakistan and the trial is going to unmask the inferior designs of Delhi against its neighbours. Indian stubbornness is against the spirit of the ICJ decision too. Over the years, the incumbent regime in Delhi has shown its tendency to instigate extremism and trample human rights or the law. This attitude has brought the country to standoff with China, Bangladesh and Sri Lanka too. Besides border-related skirmishes with its neighbours, India once tried to breach Pakistan’s airspace and lost its birds. In one instance, its pilot was captured by Pakistan, though released within days as a goodwill gesture. But those gestures do not occur every day in the matters of war and love; so, India had better file the review petition or be ready to face the consequences of the conviction handed down to Jadhav through the Field General Court Martial under the Pakistan Army Act. * 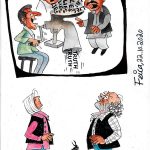