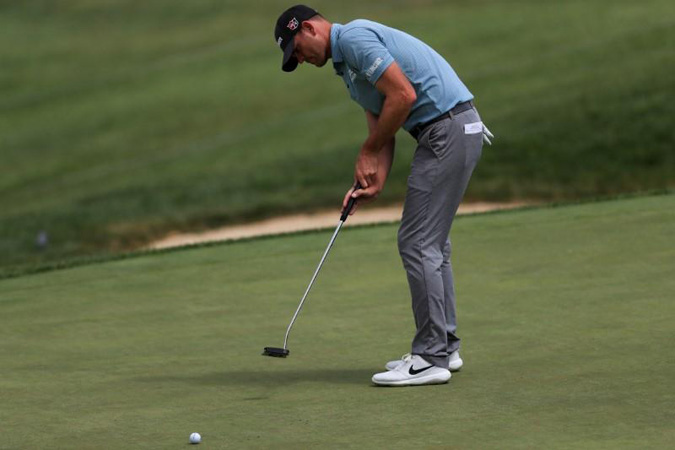 DUBLIN: Tony Finau’s hot putter helped him to a six-under-par 66 and a one-stroke first round lead while Tiger Woods bookended his first PGA Tour appearance in five months with birdies to finish one-under at the Memorial Tournament in Dublin, Ohio on Thursday. On a day that saw tough scoring conditions due to gusting winds at Muirfield Village, 30-year-old Finau stepped up his play on the greens. “I made a lot of putts. I honestly didn’t feel I hit it great off the tee. I didn’t hit a lot of fairways,” said the American, who mixed nine birdies with three bogeys.

“But I felt great out there. It was playing really tough but … I was able to execute pretty well.” Finau is one clear of Ryan Palmer, who had a bogey-free round of 67. Early leader Brendan Steele and 2019 U.S. Open champion Gary Woodland lurk two back after rounds of four-under 68. The 44-year-old Woods, back in action for the first time since February’s Genesis Open, came out blazing with birdies on two of his first three holes but mostly failed to take advantage of the course’s par-fives. “It’s been a while since I’ve played,” Woods said.

“Got off to almost an ideal start and got a feel for the round early. I just didn’t make anything today. I had looks at birdies, but I really didn’t make much.” His round ended on a high note when he coolly sank a 14-foot putt to finish in red numbers and tied for 18th. Woods is gunning for a record-breaking 83rd PGA Tour win this week. Woods went out in a group with world number one Rory McIlroy, who finished two under, and four-times major winner Brooks Koepka, who finished at even par. Former champion Bryson DeChambeau, one of the favourites coming into the Jack Nicklaus-hosted event, was one over after a round which included a monstrous 423-yard drive that led to a birdie at the par-four first hole.

Collin Morikawa, winner of last week’s Workday Charity Open, struggled on Thursday, carding a four-over 76, his highest round as a professional on the PGA Tour. Justin Thomas, fresh off a playoff loss last week, bogeyed three of his opening seven holes en route to a 74 while Dustin Johnson slumped to a dismal 80 in his first start since winning last month’s Travelers Championship.