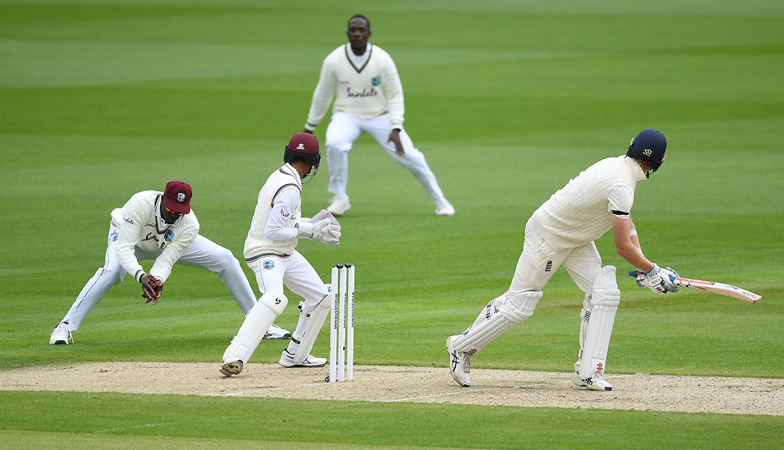 MANCHESTER: A stubborn Dom Sibley and Ben Stokes shared an unbroken 126-run stand for the fourth wicket to put England in a good position in the second Test against West Indies at Old Trafford on Thursday. At stumps on day one, England were 207 for 3 with Sibley on 86 (253) and Stokes 59 (159). They had joined at a precarious position of 81 for 3 at the fall of captain Joe Root’s wicket. The start of the game was delayed due to rain and wet outfield. Rory Burns and Dom Sibley showed the way for England in the initial hour. The conditions were overcast and West Indies had opted to field, but the pacers couldn’t get much off the wicket.

West Indies thus turned to spin quickly, and it yielded results. Roston Chase struck at the fag end of the first session to trap Burns with a straighter one, bringing in lunch. Chase struck again first ball after lunch, getting Zak Crawley caught at leg slip. Joe Root, who returned after missing the first Test, looked in good touch straightaway and settled in for a partnership with Sibley, who was patience personified. Sibley took 91 balls to score his first boundary, showing he was intent on gritting it out. Along with his captain, he added 52 for the third wicket taking them to drinks for the loss of two wickets. However, Root played a lazy shot post the drinks interval resulting in his downfall. Driving Alzarri Joseph away from the body, Root edged to second slip where Holder held on.

Ben Stokes joined Sibley with England on 81 for 3. Another wicket there would have handed over the advantage to West Indies, but Stokes ensured that wouldn’t happen. He took a leaf out of Sibley’s book and settled in patiently, although he has all the strokes in the book. Stokes scored only 9 runs off his first 42 balls before suddenly hitting Chase for a six down the ground, to show he could play both ways. The duo took England to tea at 112 for 3. The post tea session would decide which team would run away with the day’s honours. By the end of it, that would clearly go to hosts England as Sibley and Stokes batted out a wicketless session.

Neither were in a hurry to attack but showed grit and determination to pile on the runs the hard way. Sibley was stubborn and went past a half-century, while Stokes followed him gradually. As the day went on, Stokes also played some cheeky strokes, reverse-sweeping and slog-sweeping Chase. West Indies had a chance to get a breakthrough when Shannon Gabriel produced Sibley’s outside edge but Holder at second slip dropped a sitter. SIbley was on 68 then, and looks set to make West Indies pay for the mistake. Earlier, England made four changes to the side that lost in Southampton. Stuart Broad, Chris Woakes, Sam Curran and Root came in for James Anderson, Jofra Archer, Mark Wood and Joe Denly.