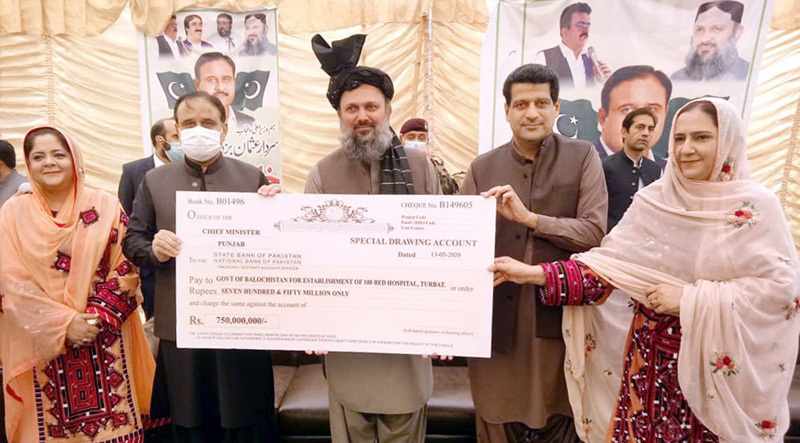 Punjab Chief Minister Sardar Usman Buzdar announced to establish a 100-bed hospital in Turbat and community centre in Taftan by Punjab government while addressing a gathering of tribal elders during a visit to Pashin on Thursday and presented one billion rupees cheque to CM Balochistan Jam Kamal Khan for the execution of both the projects. Both the projects will be the symbols of interprovincial harmony and brotherhood, he added. We are one and those engaged in sowing the seeds of bitterness will be disappointed, he stated. We don’t make tall claims but practically perform. I never feel any adventitious in Balochistan as it is my second home and I will again visit this province, the CM announced. He added that both the projects are a gift of Punjab for the people of Balochistan. The development of Balochistan is a gateway to the prosperity of the country and Punjab government is offering different projects to help solve the problems of the people of Balochistan, he further announced. Usman Buzdar said the journey of development will be continued under the leadership of Prime Minister. Such visits are necessary to promote national unity and services of CM Jam Kamal are praiseworthy for the development of Balochistan, he added. CM Balochistan thanked Usman Buzdar adding that this step of the Punjab government will prove a milestone in the promotion of interprovincial harmony. Usman Buzdar’s services for the promotion of interprovincial harmony are praiseworthy. We will together work to ensure better services to the people and to solve their problems. We will execute such exceptional work to be an example for the coming government, he added.

A delegation of PTI leaders led by Zahoor Agha and Sardar Khadim Wardak called on Chief Minister Usman Buzdar in Quetta and discussed matters of mutual interest. The CM invited them to visit Punjab and reiterated that the development of Balochistan is as dear to him as like Punjab. The country will move forward when Balochistan will progress, he added. I have brought a message of brotherhood from Punjab and our joys and sorrow are common. The country cannot tolerate any unrest and it is the time to move Pakistan forward. He maintained the elements engaged in negative politics have no future while critics are following a specific agenda of protecting personal interest. No hurdle will be allowed in the journey of public service under the leadership of PM Imran Khan, the CM concluded.

Chief Minister Usman Buzdar called on Governor Balochistan Amanullah Khan Yasinzai at Governor’s House and discussed different matters. The governor stated that Usman Buzdar is playing a commendable role by bringing the people of both the provinces closer and his passion for solving the problems by interacting with the people is worth following. He asserted that promotion of interprovincial harmony and cooperation is the need of the hour and Usman Buzdar said that people of Punjab and Balochistan have passions of love and affection for each other. I feel happy to visit Balochistan as I am always greeted with the passion of love, he said. He added that patients from Balochistan province will also be treated in DG Khan Institute of Cardiology and announced that rescue emergency service will be provided for their shifting. Similarly, trade and industry will be promoted and a proposal of setting up industrial zone at the border of Balochistan and Punjab is being reviewed. Punjab has started different projects in Balochistan as a gesture of goodwill, he added.

Chief Minister Usman Buzdar was warmly received by provincial ministers and notables during his visit to Loralai. Talking to them, Usman Buzdar assured to help solve the problems of citizens of Punjab living there in collaboration with the Balochistan government. He announced that opportunities for trade collaboration will be exploited as the minerals can change the destiny of the area. He said peace and harmony are a prerequisite of development as peace promotes development. He commended the services of security agencies for maintaining peace in Balochistan and added that federal and provincial governments are doing worthwhile steps to put Balochistan on the road to development. We are striving for the peaceful solution of tribal clashes, he added. We visit for the promotion of bilateral relations and intend to further promote trade relations with Balochistan. He announced a state-of-the-art vegetable market will be set up in DG Khan to facilitate the farmers of Balochistan and cold storage will also be set up along with a new truck stand. Visits of the chief minister and ministers of Balochistan to Punjab are always a source of happiness, he added. Provincial ministers of Balochistan paid tributes to Usman Buzdar adding that Punjab is the only province which has supported Balochistan in every crisis. Bilateral relations are improved and interprovincial harmony is enhanced after Usman Buzdar has become the chief minister, they added.