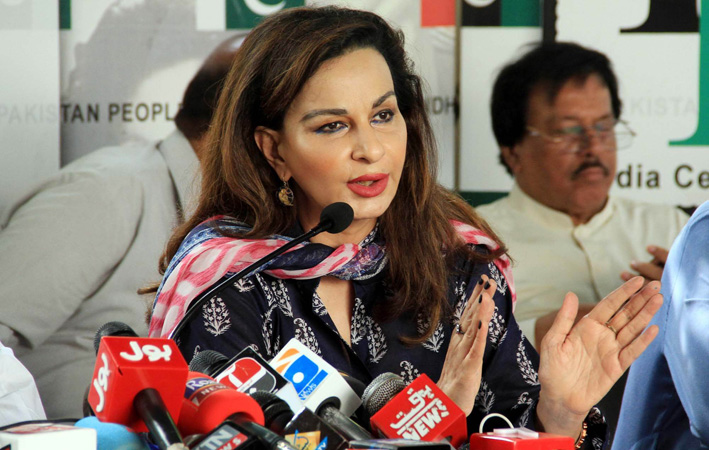 Imran Khan is imposed on Pakistan as an epidemic and engulfing Pakistan from one crisis to another. They also said that Faisal Vawda passport is still valid and the election commission will be approached with this valid passport.

This was said by the leaders of Pakistan People’s Party Dr Nafisa Shah, Palwasha Khan and Haider Zaman Qureshi in a press conference held in Islamabad. Nazir Dhoki was also present on the occasion.

Dr. Nafisa Shah said that Chairman Bilawal Bhutto Zardari has challenged selected Prime Minister Imran Khan for debate on national issues on every forum including the parliament. Chairman Bilawal has challenged the government to show even one hospital in Punjab and KP like NICVD in Sindh. Dr. Shah said that PTI has not yet responded regarding its relation with Abraj Group which is a financer of Imran Khan. The government has also not answered questions about the mega corruption in BRT Project and Malam Jabba. Dr. Nafisa Shah addressing the press conference said that the government has not yet taken any notice of the threat by Ehsanullah Ehsan. Ehsanullah Ehsan had fled the safe house but the government has not come out clean on his escape. This is the reason that the people and Pakistan People’s Party call Imran Khan “Taliban Khan”. PIA suffered losses of billions of rupees due to irresponsible statement of aviation minister. Now, Civil Aviation is asking every country to restore Pakistani pilots because their licenses are not fake. Not even any enemy country can render so much losses to Pakistan as this aviation ministry has done. She said that PPP vows to raise its voice for honest pilots and employees of PIA.

Palwasha Khan said that the threat by Ehsanullah Ehsan to Chairman Bilawal is directly linked with Imran Niazi. The government when failed to frighten Chairman Bilawal from NAB so terrorists were brought to the fore to threaten him. Imran Khan’s government has started trade with India and we ask Imran Khan that on whose orders, this trade is being started. The government has failed to answer any question asked by Mrs. Justice Qazi Faez Isa. Imran Khan and his friends are a bunch of “Banarasi Thugs. She said that whenever Imran Khan is asked about corruptions by the Abraj Group and foreign funding of his party then the threats are delivered by terrorists but he should not forget that Bilawal Bhutto is the son of a great leader who openly challenged these terrorists. She said that PPP will continue to raise the issue of corruption of Aleema Khan and Imran Khan and nothing can frighten us.

Haider Zaman Qureshi said that federal minister Faisal Vawda is a cowboy whose US passport is still valid. He said that Imran Khan is the king of corruption and his entire family is involved in corruption. A video of the cousin of Imran Khan is doing circles. Qureshi said that not a single employee in the ministry of Murad Saeed has been promoted despite the approval of the cabinet. All the motorways are deteriorating fast and no work is being done on any of the motorways.

Meanwhile, addressing the media after attending the Aviation Committee, Parliamentary Leader of the PPP in the Senate, Senator Sherry Rehman said, “After 2 hours of solid questioning, the civil aviation authority (CAA) and minister Aviation statements are not matching. It is alarming that no one is taking responsibility for anything while PIA remains grounded. No one could tell how many licences were issued and from where. The Aviation Minister was adamant that he did the right thing. While we have been telling them that this issue needs to be resolved tactfully. Why was this done publicly?”

Commenting on the fake degree scandal, the Senator stated that, “There is no certainty if the licenses are fake or genuine as they have been making contradictory statements since day one. Today, we do not even know who is actually investigating this issue. It is shocking that no one is ready to take responsibility. For the last 15 months, we were requesting the federal government to scrutinize all of this but the federal government conveniently disregarded our concerns. “The government is giving the wrong impression that the Minister has satisfied the committee. When in fact the entire Civil Aviation division and the Aviation Minister were not able to satisfy anyone nor could they match their statements,” she added.

She said, “After this meeting I don’t see any hope from them. I don’t think they can stabilize PIA. Who is responsible for our pilots and PIA’s downgrading? Do they have any action plan? We have not been given any clarification. Even we knew there is an issue which needs to be resolved but what did they do instead? Nothing.” “Instead of investigating the issue first, the Minister first gave a statement and then said that we will investigate. This has led to sheer embarrassment for the country. PIA is our national flag carrier and should not have been treated in this manner. Pakistan’s image has been tarnished,” the Senator added. Highlighting the Roosevelt Hotel issue, she said, “The explanation offered for the sale of the Roosevelt Hotel is flimsy and pointless. The claim in committee is that the sale of a profitable hotel was “only made after Covid-19 onset, in anticipation of reduced business and profits. Whereas, the task force to sell it was made in 2019.”