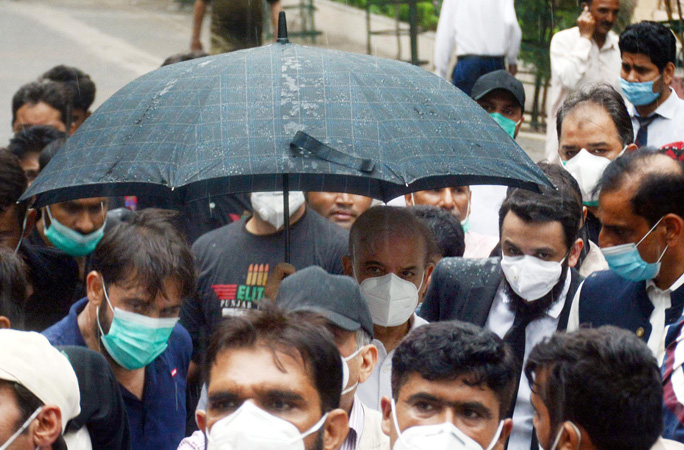 The Lahore High Court (LHC) Thursday extended the interim bail before arrest of Pakistan Muslim League-Nawaz (PML-N) President and Opposition Leader in the National Assembly Mian Shehbaz Sharif till July 23 in the assets beyond means and money laundering cases.

PML-N activists accompanied Shehbaz Sharif to the high court. They chanted slogans against the police with which they clashed outside the court.

A two-member bench comprising Justice Masood Abid Naqvi and Justice Sardar Ahmed extended the bail of Shehbaz Sharif due to unavailability of his lawyers. Opposition leader Shehbaz Sharif appeared before the court and stated that his lawyers are busy in some other cases in Islamabad.

“When will the lawyers be available,” inquired Justice Masood Abid Naqvi. Later, he put off the hearing for two weeks.

Shehbaz Sharif said despite doctors’ advice he came personally in the respect of the court. “My illness has been made a subject of political discussions at different forums,” he further said.

The PML-N President said, “Now NAB says they are going to investigate contrary to the NAB statement in last hearing in which they accepted their investigations have been completed.”

Shehbaz Sharif said, “I swear seven people in the NAB said their investigations have been completed.”

The former Punjab chief minister said, “The NAB said one thing and its officer the other in the court.”

Shehbaz Sharif maintained that if the need arises he will again appear before the NAB.

Muqam’s counsel and the National Accountability Bureau’s (NAB) prosecutor appeared before the court.

The NAB has accused Muqam of purchasing properties in Islamabad, Lahore and Peshawar. He is also accused of purchasing precious agricultural land in Swat, Shangla and Peshawar, besides having several bank accounts. Muqam’s wealth and luxurious lifestyle do not match his known income and that is why investigation against him was initiated, said officials privy to the matter.

The NAB KP started the inquiry against Ameer Muqam in July last year, after orders of the NAB Chairman Justice (Retd) Javed Iqbal.

Engineer Ameer Muqam is President of PML-N Khyber Pakhtunkhwa. He has previously served as adviser to the prime minister. He had contested the July 25 election from two National Assembly and two provincial assembly seats on the PML-N ticket but lost all four.

The anti-graft watchdog has asked the PML-N stalwart to appear before the NAB office today (Friday) at 11 am along with the relevant documents. The anti-corruption watchdog has summoned Khuwaja Asif after he failed to satisfy the joint investigation team when being questioned about the housing scheme scandal in the last appearance on July 3.