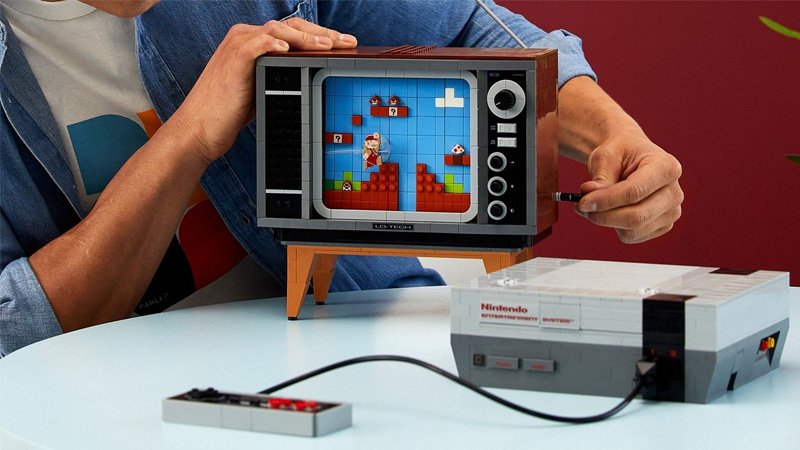 The partnership between toy brick company LEGO and video game icon Nintendo now includes a $229 / €299 reconstruction of the 1983 Nintendo Entertainment System console. Launching August 1, 2020, the 2,464 piece LEGO NES comprises a self-assembly Nintendo Entertainment System, a wired, brick-based controller, a recreation of the “Super Mario Bros.” game cartridge, and the parts required to make an imitation early 1980s television set containing a looping, hand-cranked video game level and a rod puppet Mario. That the scrolling “Super Mario Bros.” panorama is slotted into the LEGO television set leaves room for the two toy companies to collaborate on other background inserts. The replica TV can be combined with a special Mario figurine from the Lego Super Mario Starter Course. The figurine’s built-in loudspeaker will play the “Super Mario Bros.” motif and provide sound effects as the LEGO level scrolls by. Recommended for those age 18 or older due to its complexity, the Lego Nintendo Entertainment System launches on August 1 along with the rest of the Lego Super Mario line: the $/€59 Lego Super Mario Starter Course and a range of expansions that are priced from $/€3.99 for a blind-box non-Mario character and $/€9.99 for alternate costumes for the Mario figurine to $/€99.99 for a Bowser’s Castle set.