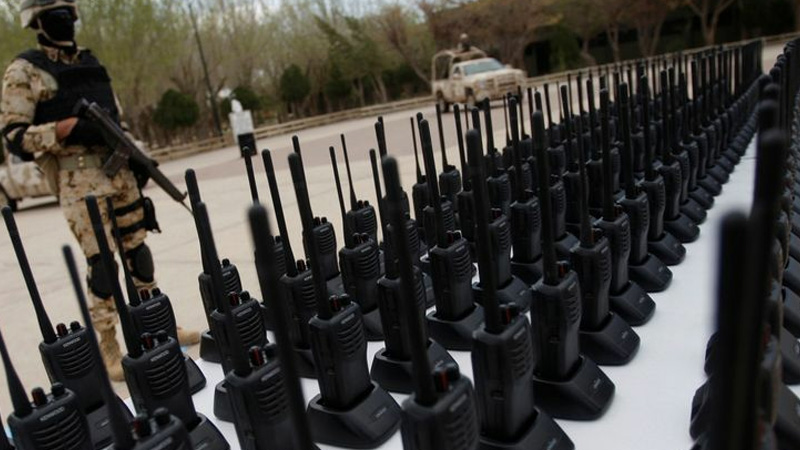 The young technician shut off the electricity at a cellular tower in rural Mexico to begin some routine maintenance.

Within 10 minutes, he had company: three armed men dressed in fatigues emblazoned with the logo of a major drug cartel.

The traffickers had a particular interest in that tower, owned by Boston-based American Tower Corp, which rents space to carriers on its thousands of cellular sites in Mexico. The cartel had installed its own antennas on the structure to support their two-way radios, but the contractor had unwittingly blacked out the shadowy network.

The visitors let him off with a warning.

“I was so nervous… Seeing them armed in front of you, you don’t know how to react,” the worker told Reuters, recalling the 2018 encounter. “Little by little, you learn how to coexist with them, how to address them, how to make them see that you don’t represent a threat.”

The contractor had disrupted a small link in a vast criminal network that spans much of Mexico. In addition to high-end encrypted cell phones and popular messaging apps, traffickers still rely heavily on two-way radios like the ones police and firefighters use to coordinate their teams on the ground, six law enforcement experts on both sides of the border told Reuters.

Traffickers often erect their own radio antennas in rural areas. They also install so-called parasite antennas on existing cell towers, layering their criminal communications network on top of the official one. By piggybacking on telecom companies’ infrastructure, cartels save money and evade detection since their own towers are more easily spotted and torn down, law enforcement experts said.

The practice has been widely acknowledged by telecom companies and Mexican officials for years. The problem persists because the government has made inconsistent efforts to take it on, and because companies have little recourse to stop it, experts on law enforcement and Mexican society said.

“There is a sense of powerlessness” in Mexico, said Duncan Wood, director of the Wilson Center’s Mexico Institute in Washington. He said companies feel they “cannot respond to issues like this because (they) are afraid of the consequences from groups that essentially enjoy impunity.”

The nation’s Attorney General’s office did not respond to a request for comment about criminal activity at these sites. The Federal Telecommunications Institute, Mexico’s telecom and broadcasting regulator, said its compliance unit had not received reports of parasite antennas from any companies under its jurisdiction.

Reuters has provided the first in-depth account of how traffickers exploit Mexico’s telecom infrastructure and the toll it takes on workers. The news organization interviewed 14 current and former telecom workers about the interactions that they and their colleagues have had with criminal groups at cell towers.

Twelve of them said they had seen parasite antennas on towers belonging to Telesites SAB de CV, a tower rental company in which the family of Mexican billionaire Carlos Slim is a major shareholder; as well as American Tower, US carrier AT&T Corp, Spain’s Telefonica SA and Mexico’s Axtel SAB de CV.

Reuters is omitting the technicians’ names, details of where they work and most names of cartels they encounter for the workers’ protection. Two technicians shared texts they exchanged with colleagues regarding on-the-job run-ins with organized crime at the cell towers, and one of them shared a photo of an illicit device he discovered in the course of his work.

The incidents the 12 workers recounted occurred between 2015 and 2020 in several Mexican states.

Most of the technicians said they encounter the devices, known colloquially as narco-antennas, just a few times a year.

But one engineer who spoke with Reuters estimated that parasite antennas are present on roughly 20% of towers where his firm works, while another said about 30% of his sites had them when local criminals were particularly active in his area in 2018.

Their No. 1 rule when discovering cartel equipment on a tower is simple: Don’t touch it.

Dealing with gangsters in person is trickier, they said, requiring diplomacy and a cool head. Some said their interactions have been cordial, bordering on friendly. Others said they have been threatened, detained and at times fearful for their lives.

The traffickers “convey their superiority, …it’s like when someone wants to mark their territory,” one technician said. “I can’t get nervous because they pick up on when someone is secure and when someone is very afraid.”

Cartels and other criminal groups sometimes demand telecom workers pay “security payments” or “quotas” in order to perform maintenance on towers and other tasks, according to five contract laborers who have worked on projects involving America Movil SAB de CV, Slim’s telecommunications firm, as well as American Tower and AT&T.

These people said the best strategy is to be polite, stay calm and pay up immediately. Those costs get passed along to their employers; laborers for subcontractors said their firms often charge the big telecom companies higher rates for working in dicey areas.

A spokesman for America Movil and Telesites declined to comment. Axtel, which sold some of its telecom towers in 2017, said it had not received any reports of incidents on its remaining infrastructure. AT&T said that “under no circumstances” does it “tolerate or authorize payments outside of those established by law.”

An American Tower spokesman said “we have not received any credible reports” of parasite antennas or other cartel activities at the company’s Mexican sites. He said the firm alerts local authorities immediately if a site is vandalized, and that “the safety of those who work on our towers, as well as the towers’ continued secure operation, are our top priorities.”

Guillermo Ramos, Telefonica’s director of security in Mexico, said the company has not received any reports of parasite antennas over at least the past year.