Behind in the polls, Trump unloads on Biden at White House press event 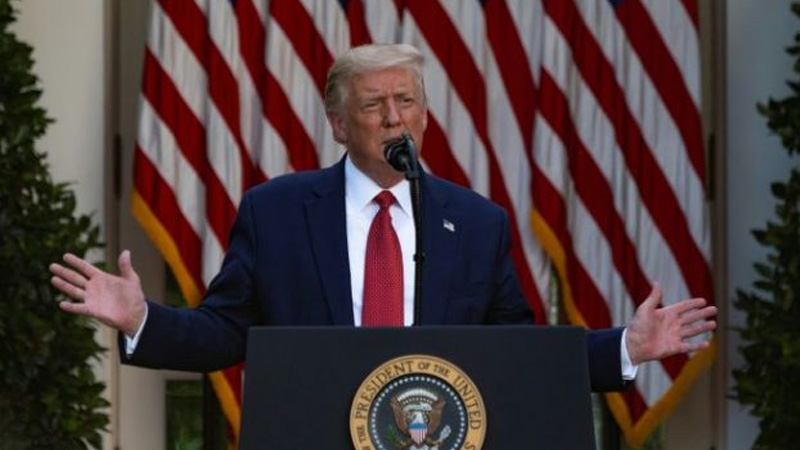 He started with announcements on China and Hong Kong, but quickly switched to the real reason for holding a press event — his election opponent Joe Biden.

Donald Trump stood at the presidential podium in the White House Rose Garden on Wednesday and unleashed a torrent of criticism on his Democratic opponent, turning the press conference into a campaign event.

In a long, disjointed monologue of almost an hour, the Republican billionaire — who is trailing Biden in the polls 110 days before the vote — poured out his frustration.

Trump read out a long list of allegations against his rival, accusing him of drifting to the “radical left” and painting an apocalyptic picture of the United States under a Biden presidency.

He accused Biden of “fawning” over China and wanting to “kill” the US energy sector, said his policies would “demolish” the economy, and once again tried to implicate his son Hunter by alluding to his role on the board of a Ukrainian company accused of graft.

“Where is Hunter?” he asked.

Trump alternated his attacks with fulsome praise for what he sees as his own successes. That included the wall built on part of the border with Mexico, which he claimed had helped to stem the number of COVID-19 cases in the United States.

He also praised his own reaction to the global pandemic, claiming his administration’s actions have saved “millions” of lives, despite the United States remaining by far the most affected country in absolute terms.

The Biden campaign countered later Tuesday by attacking Trump’s decision to veer in to the campaign during an official event at the White House.

“The American taxpayer should be reimbursed for the abuse of funds this spectacle represented,” Biden’s director of communications Kate Bedingfield said.

And, despite the soaring hyperbole, when the president finally paused for questions it was apparent that the media sitting in the Rose Garden with him were unconvinced.

“No, I don’t,” Trump replied simply. Then, decrying the results of multiple national polls as “fake,” he said: “I think we have really good poll numbers.”

“I think that the enthusiasm now is greater and maybe far greater than it was in 2016,” he continued — though he admitted that many voters “don’t want to talk about it… and I fully understand that.”

Even so, he claimed, “I think you have a silent majority the likes of which this country has never seen before. This is a very important election.

“I think we have a great chance.”