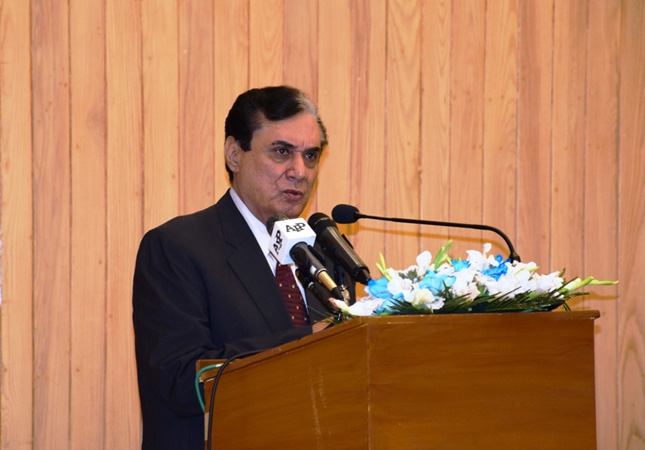 NAB Chairman Justice Javed Iqbal has said that corruption is the root cause of all evils. NAB is absolutely committed to nabbing corrupt elements as the logical conclusion of mega corruption white collar crime cases is top most priority of NAB.

The Chairman NAB said that NAB’s faith is Corruption free Pakistan which is in line with its national anti corruption strategy of Awareness, Prevention and Enforcement. He said that NAB is the focal organization of Pakistan under United Nations Convention against Corruption (UNCAC) as Pakistan is signatory of UNCAC. World Economic Forum and Transparency International Pakistan, PILDAT and Mishal Pakistan have lauded NAB’s performance in eradication of corruption. He said that NAB’s Operation, Prosecution, Human Resource Development, Training and Research and Awareness and Prevention have been rejuvenated in order to further improve their performance.

The Chairman NAB said that NAB’s prime focus is on corruption and corrupt practices i.e.; money laundering, misuse of authority, cases of cheating the public at large, bank frauds, wilful bank loan defaults and embezzlement of state funds etc. He said that the overall complaints in 2019 were 53643 and processed 42760 whereas complaints in 2018 were 48591 and processed 41414. Increase in the number of complaints also reflects enhanced public trust in the NAB. NAB during 2019, processed 1308 complaint verifications, 1686 inquiries and 609 investigations and recovered Rs 141.542 billion from corrupt elements in 2019 and NAB’s accumulative success ratio is about 68.8 percent which is a remarkable achievement in investigation of White Collar Crimes in the world. He said that NAB has recovered Rs.466.069 billion from corrupt elements since its inception and deposited in national exchequer.

He said that NAB has introduced a new concept of Combine Investigation Team (CIT) in order to benefit from the experience and collective wisdom of senior supervisory officers, a system of CIT comprising of Director, Additional Director, Investigation Officer, Legal Counsel, financial and land revenue experts has been put in place besides establishing its own state of the art Forensic Science Laboratory in NAB Rawalpindi which has facilities of Digital Forensics, Questioned Documents and Fingerprint Analysis. In 2019, 15747 questioned documents and 300 thumb impressions were analyzed in 50 cases and forensic analysis was carried out on 74 digital devices (Laptops, Mobile phones, Hard Disks etc). He said that NAB is the Chairman of SAARC anti-corruption forum. NAB is considered as a role model among SAARC countries. He said that Pakistan’s Apex Anti Corruption Agency, NAB is the only Organization in the world with whom China has signed a Memorandum of Understanding (MoU) to oversee projects to be undertaken under CEPC in Pakistan. He said that signing of Memorandum of Understanding (MOU) between Pakistan and China is especially significant in the backdrop of increasing economic and trade cooperation between Pakistan and China with the resolve by both the Governments to work in a fair, impartial and corruption free environment in order to share their experiences to eradicate corruption. He directed all DGs of NAB Regional Bureaus to conduct all complaint verification, inquiries and investigations on the basis of solid evidence as per law.