* Imran Khan says due to poor policies of previous regimes, his government inherited a huge $20 billion current account deficit
* More dams will be built in country to meet future needs 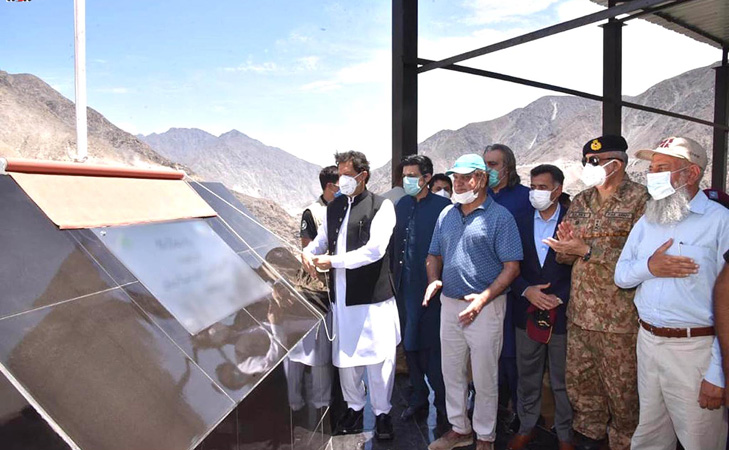 Prime Minister Imran Khan on Wednesday kicked off the mega construction work at Diamer-Bhasha Dam at River Indus near Chilas.

The 272-metre high, having capacity of 6.4 million acre feet, the water reservoir will be the country’s third big dam after Tarbela and Mangla dams and will produce 4,500mw inexpensive and green hydel power.

Prime Minister Imran Khan termed the construction of Diamer-Bhasha Dam a ‘window of development and opportunities for the people of Gilgit-Baltistan’. “Diamer-Bhasha Dam will change the fate of locals and bring immense development in the area,” the prime minster said while addressing a public rally, after he commenced the mega construction work of the dam. He said Pakistan is blessed with natural water resources with steep land gradients to generate fast flow, required for producing less expensive electricity. He regretted that previous governments ignored construction of dams and instead opted for fuel modes for electricity generation.

The prime minister said producing electricity through imported fuel and furnace oil resulted in high current account deficit that took the economy to downward trend, currency devaluation, inflation, poverty and de-industrialization. He said due to such poor policies of previous tenures, his government inherited a huge $20 billion current account deficit. He said only those nations thrive that invest in human resource by focusing on education, health and justice. He cited the example of China’s success based on long-term plans to attain a stable place in the comity of nations. He said more dams would be built in the country at regular intervals to meet the requirements of future.

The prime minister also mentioned his plantation campaign aimed at reducing the risks of climate change as the country falls in list of 10 most vulnerable. He said the Northern Areas including Chilas depended on tourism which was greatly impacted by the current coronavirus pandemic. He asked the chief commissioner to allow tourists with standard operating procedures (SOPs), to be recommended by the National Command and Operation Centre (NCOC).

He expressed the confidence that people of Chilas would not lag behind in development as the Diamer-Bhasha Dam project would create job opportunities. He said construction of a cadet college in Chilas is also underway, which will provide best education facilities to local students. He expressed satisfaction over the fact that electricity is being provided free of cost to the locals.

Imran Khan said increase in budget for Gilgit-Baltistan is aimed at uplifting its residents and to improve their living standards. He said other neglected parts of the country including erstwhile tribal areas and Balochistan are being given unprecedented funds to bring them into journey of mainstream development.

Earlier, the prime minister was given a briefing at the dams site, which was also attended by Minister for Water Resources Faisal Vawda and Federal Minister for Kashmir Affairs and Gilgit-Baltistan Ali Amin Gandapur. Chief of Army Staff General Qamar Javed Bajwa and Director General Inter-Services Intelligence Lt General Faiz Hameed were present.

Meanwhile, Special Assistant to Prime Minister on Information and Broadcasting Lt Gen (r) Asim Saleem Bajwa on Wednesday said that Diamir-Bhasha hydel power project will create 16000 job opportunities during the construction period of the project. In a tweet, he termed inauguration of construction work on the project by the Prime Minister Imran Khan a milestone saying it would produce 4500 MW cheap and clean hydel power. He added that the project would have capacity to store 6.4 million acre feet reservoir that would add 1.2 million acres agricultural land in the country. Asim Bajwa said during construction of dam, a number of allied industries including steel and cement will also get boost.