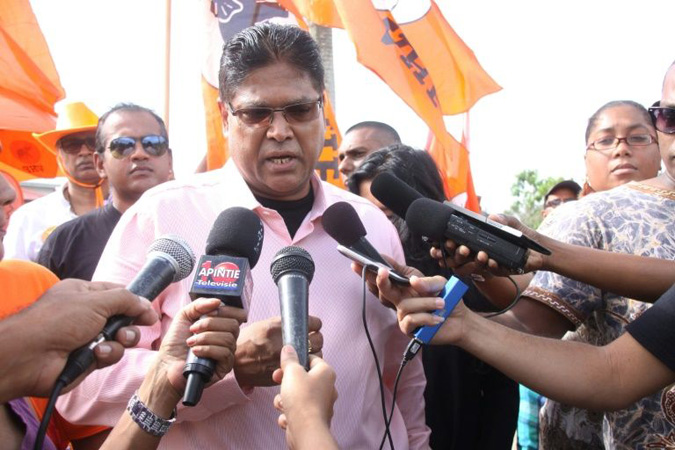 Suriname elected former police chief and opposition leader Chan Santokhi as its new president Monday, ending the rule of Desi Bouterse, who has weighed heavily on the South American country’s politics for decades.

Santokhi, 61, was elected by the 51-member National Assembly to rule the tiny oil-and-gold exporting nation for the next five years.

He told the assembly he was inheriting a country “on the brink of financial collapse. We are balancing on the edge of an international default.”

After a divisive campaign that saw his party win May’s general election, Santokhi called for unity to tackle the country’s economic problems “shoulder to shoulder.”

His victory brings an end to the rule of former military strongman Bouterse, who was first elected president in the former Dutch colony in 2010 after initially seizing power in 1980 and ruling for seven years.

Bouterse, now 72, seized power briefly a second time in a bloodless coup in 1990.

In November, he was sentenced to 20 years in prison by a military court for ordering executions during his first period in power, in 1982.

He was convicted of having 15 political opponents — including lawyers, journalists and businessmen — rounded up and executed.

Bouterse appealed his conviction, and the case was postponed due to the coronavirus pandemic.

Santohki’s Progressive Reform party won 20 seats in May elections, enough to form a coalition government with the General Liberation and Development Party of Ronnie Brunswijk, who will be vice-president.

Brunswijk is a former rebel leader who fought a civil war against Bouterse in the late 1980s.

Santokhi is due to be sworn in as new president on Thursday.

Suriname, on the northeastern shoulder of South America, shares a border with Guyana, Brazil and — through French Guiana — with France.

Macron added that he hoped the two would work together to kickstart “cross-border cooperation,” stalled over a long-time dispute over the common frontier.