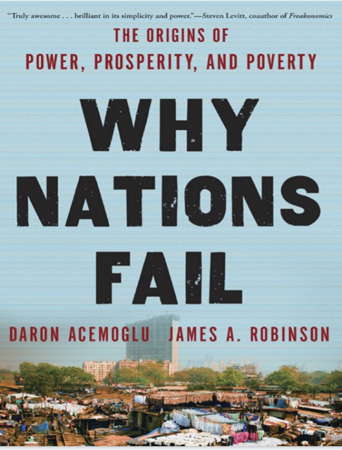 Acemoglu and Robinson’s main argument is that political and economic institutions are the fundamental cause of income inequality in today’s world. Douglass North contributed significantly to the area of institutional analysis of society and the role of institutions for long-term development. Acemoglu and Robinson elaborated North’s analysis by making a distinction between inclusive and extractive institutions in terms of their impact on a nation’s development. Inclusive political and economic institutions, the authors argue, are the main cause of economic development. Inclusive political institutions are defined as sufficiently centralized and pluralistic political structures in which absolute power cannot appear to govern the system in favour of those holding the power at the expense of the rest of the society.

According to their definition, extractive institutions appear if the political system is not pluralistic or not sufficiently centralised. They characterize rich nations as the countries where citizens defeated the elites controlling the power and created a society in which political rights are distributed widely. Also, in this society, the government is responsive to citizens and it is accountable for its actions. They define inclusive economic institutions as the markets in which people can freely fulfil the opportunities compatible with their capabilities. Inclusive economic institutions provide secure property rights, encouraging innovation and business. Anyone can test his or her ideas by going into business and can make a profit if he or she can survive in the market.

Innovators continue to invest since they could reap profits generated from their innovations. Workers could choose jobs in which they can fulfil their productive capacity. Less creative firms can be replaced by more creative firms. This process is the so-called “creative destruction,” developed by Joseph Schumpeter. According to Acemoglu and Robinson, ensuring property rights, widely distributed political rights, government accountability, and a sufficiently strong central government are the key pillars of development. In their theory, the state’s role is to be the enforcer of law and order, private property rights, and contracts in addition to providing key public services. They argue that if political centralization is not achieved by the state, society ends up with chaos, which prevents economic development. So, they support Max Weber’s definition of the state, an organization that claims monopoly on the legitimate use of violence. They argue that other economic growth supporting factors, like education and culture, are the outcome of the institutional process. For example, the low level of education as a main constraint on growth is attributed to the failure of political and economic institutions in poor countries since economic institutions do not provide enough incentives for parents to value education and political institutions do not provide infrastructure of education.

Acemoglu and Robinson also discuss why other theories are not causal for explaining the income inequality in the world. They refute the idea of geography led by Jeffery Sachs and Jared Diamond who proclaim that geographical location of the country is the explanation for development. Acemoglu and Robinson give examples of South and North Korea, East and West Germany, Nogales on the US and Mexico border.

Although these places have the almost same geographical characteristics, they have very different development outcomes. Therefore, they argue against the geography hypothesis. They also do not agree that cultural differences can explain differences in development level. Acemoglu and Robinson provide two examples in this regard. They first point out the example of East Asian success highlighting that religious differences cannot explain differences in development levels. East Asian countries, for instance, have achieved a level of development comparable to Christian developed economies, although they are not widely Christian. Second, they point out the low level of development in Africa, and argue that slavery rather than the African culture, had caused lack of incentive to become productive, and hence can potentially explain the low level of wealth African nations have. Finally, they argue that the ignorance theory also does not hold.

The ignorance theory says that countries are poor because of poor policies implemented by policy makers. The policy implication of the ignorance argument is that the development challenge can be overcome if good economic policies are offered to policy makers. Acemoglu and Robinson argue that existing political and economic institutions determine which policy is good or bad. For example, under extractive political institutions, the king of the Congo may think slavery is a good policy for generating resources. Their conclusion implies that the development business should give greater attention to political processes in poor countries and their implications.

While Spaniards established more extractive institutions in Latin America, English colonists in Virginia established more inclusive institutions in spite of their desire to establish a similar system to colonists in Latin America. Spaniards were able to exploit the indigenous people to create wealth from rich minerals like gold and silver. However, English colonists realized that they could neither force indigenous people to work nor they could exploit settlers. In addition, they could not find rich minerals like Spaniards found in Latin America. Therefore, inclusive economic institutions were the only way to incentivize settlers to create wealth out of farming. Acemoglu and Robinson argue that determinants of institutional differences among nations are critical juncture and institutional drift. They give Black Death as an example of critical juncture, or external shock, to feudal societies in Western Europe and Eastern Europe. Because Western peasants had more autonomy and power in comparison to peasants in Eastern Europe, the Black Death caused the end of feudalism in West Europe but not in East Europe.