Pakistan vows to stand by Kashmiris come what may 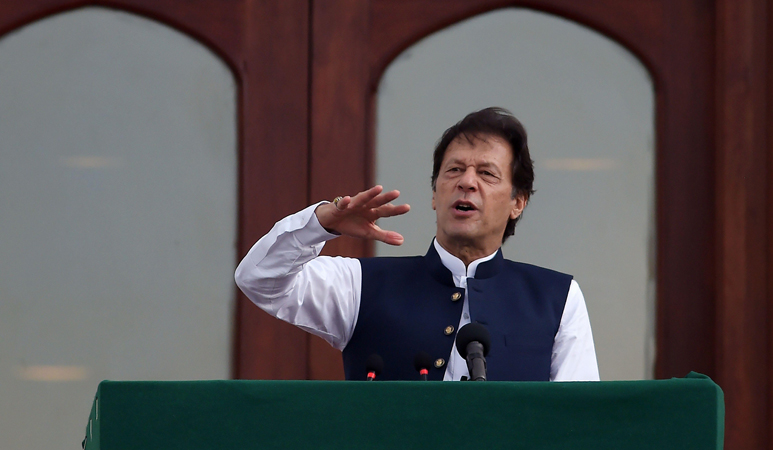 As Pakistanis and Kashmiris marked the Kashmir Martyrs’ Day on both sides of the Line of Control (LoC) on Monday to pay tribute to the martyrs of the 1931 carnage, Prime Minister Imran Khan said that Pakistan always stood steadfast for the Kashmiris’ right to self-determination and will continue to support this just struggle till Indian-held Kashmir is liberated from the clutches of Indian illegal occupation.

In a series of tweets on the Yaum-e-Shuhada-e-Kashmir, the prime minister expressed the hope about liberation of Kshmir. “That day is not far,” he tweeted. “On Yaum-e-Shuhada-e-Kashmir, we salute Kashmiris for their continued struggle against the illegal and barbaric Indian occupation of Jammu and Kashmir,” he said. “The Shuhada of July 13, 1931 were the forefathers of today’s Kashmiri resistance,” he said. “Their descendants have, generation after generation, laid down their lives for freedom and today they continue to valiantly fight & defy a Hindutva Supremacist regime bent on demographic engineering to wipe out the Kashmiri people & their identity,” he added.

Pakistan Muslim League-Nawaz (PML-N) President and Opposition Leader in National Assembly Shehbaz Sharif said that 22 Kashmiri youth took on despotic Dogra Raj in 1931 and wrote a history of bravery. The PML-N leader took to social-networking website and posted, “Despite intensification of violence post-August 5 by India, Kashmiris of all ages and across genders are challenging Indian PM Modi’s fascism today with their blood.” They are hope of future, he added.

Pakistan People’s Party (PPP) chairman Bilawal Bhutto Zardari said that Kashmiris will soon get freedom and India will face defeat. Indian leaders will continue to stumble with the echo of the Azaan that was given by Kashmiri martyrs, he added.

Minister for Information and Broadcasting Senator Shibli Faraz said that Kashmir Martyrs’ Day is a bright chapter in the history of Kashmiris’ struggle against oppression. In a tweet, he said that this is the day of remembrance of the sacrifice of the great sons of the soil who bravely gave up their lives in the face of oppression. He said that today, the valley of paradise has become a hell of oppression. “Kashmiris today are facing the worst Indian state terrorism at the hands of fascist Modi regime of India,” he remarked.

On July 13, 1931, around 22 Kashmiris were martyred by the troops of Dogra Maharaja for appearing outside the Central Jail in Srinagar in support of Abdul Qadeer, who was charged for instigating people to defy the Dogra Rule.

Functions and seminars across the AJK were arranged on Monday to pay glowing tributes to martyrs on this day. The All Parties Hurriyat Conference (APHC) had appealed to the Kashmiris to observe a complete strike in Indian-held Kashmir in view of the ‘Kashmir Martyrs’ Day.’ In a statement, the APHC spokesman said the strike call was given to stress the urgent need for a peaceful and just solution to the Kashmir dispute. “It was also meant to underline the need for stopping the continuous Indian oppressions against the Hurriyat leaders and the Kashmiri people,” he further said. “Kashmiri martyrs are the real assets of the freedom movement and Kashmiris will never forget their martyrs and will never forgive India for its crimes,” he remarked, and stressed that the Kashmiris will always remember the sacrifices of their martyrs, saying ‘death over slavery’ is the message of the Kashmiri martyrs for India.

Separately, a senior Indian diplomat was summoned to the Ministry of Foreign Affairs on Monday to register Pakistan’s strong protest over the ceasefire violations by the Indian occupation forces along the Line of Control (LoC) on Sunday, resulting in serious injuries to six innocent civilians.

The Indian occupation forces along the LoC and the Working Boundary (WB) have been continuously targeting civilian populated areas with artillery fire, heavy-caliber mortars and automatic weapons. This year, India has committed 1659 ceasefire violations to date, resulting in 14 martyrdoms and serious injuries to 129 innocent civilians.

Condemning the deplorable targeting of innocent civilians by the Indian occupation forces, it was underscored that such senseless acts are in clear violation of the 2003 Ceasefire Understanding, and are also against all established humanitarian norms and professional military conduct. These egregious violations of international law reflect consistent Indian attempts to escalate the situation along the LoC and are a threat to regional peace and security. It was added that by raising tensions along the LoC and the WB, India cannot divert attention from the grave human rights situation in the occupied valley.