Imran Khan a ‘danger’ to nation, economy and democracy: Bilawal 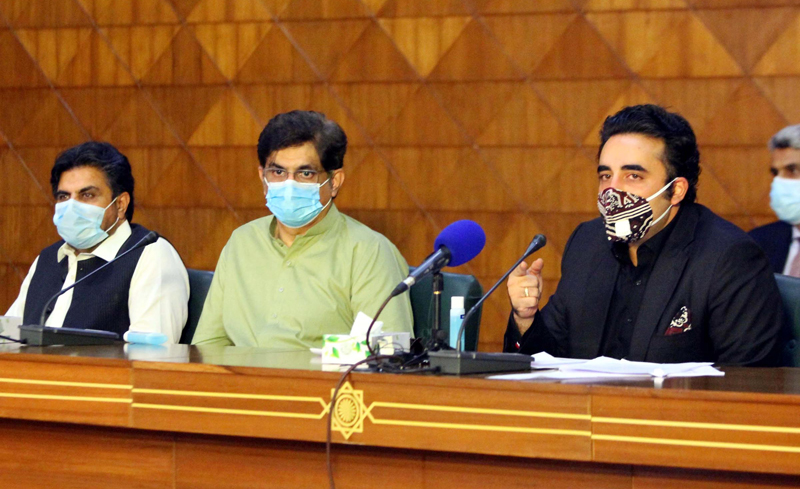 “Imran Khan is the first and the last prime minister who failed to unite the nation even on the Kashmir cause,” he said while addressing a press conference flanked by PPP leaders in the metropolis. “Every government in the past – dictatorship, democratic, selected, or elected – was able to unite the people on the cause of Kashmir,” he said. “But, I am surprised that despite all these problems, prime minister, on the floor of the House, said that PTI’s foreign policy has been the most successful,” he wondered. “I am the only politician from opposition and treasury benches to oppose Modi. Unlike the appeasement policy that either of the ruling parties has had with Modi, PPP has always maintained its stance and has opposed him from day one and will do so in the future,” he went on to say. “But this incompetent prime minister has failed to form national unity on Kashmir cause, he is the prime minister who ran Modi’s election campaign claiming that if Modi wins, the Kashmir issue would be resolved,” he added.

The PPP chairman accused the PTI government of putting the lives of people in danger by lowering Covid-19 testing capacity ‘on purpose’ while refuting the claim that coronavirus cases in the country were going down. He said Prime Minister Imran Khan and his ministers are ‘making a mockery’ of themselves when they claim that the graph of coronavirus cases is going down. “If you stop testing, then the graph will [obviously] go down. But the same number of people will fall ill and die,” he said. “They are putting the lives and the health of the people in danger. They are lowering testing capacity […] this is a conspiracy against the people, they’re not fooling anyone,” he added.

On the other hand, Bilawal claimed that Sindh is conducting the highest tests per capita and had the most intensive care unit (ICU) and high dependency unit (HDU) beds per capita. “When the Centre was celebrating 100 days of battling the pandemic at the National Command and Control Centre, the Sindh health minister was inaugurating a 50-bed infectious diseases hospital in Karachi,” he maintained.

Bilawal maintained that the PPP’s actions show that it is committed to helping the people during this difficult time, claiming that Sindh was the only province offering free Covid-19 testing and treatment. “If you need to get tested and don’t have the money, we will do it for free. If you can’t afford treatment for Covid-19, the government will provide it. We are the only province that has been doing this since day one,” he said.

Bilawal urged the government to give relief to the frontline workers, labourers, farmers, and those affected by the coronavirus. He claimed that the Sindh government, despite all the hurdles and adversities, presented a people-friendly budget. “Due to the federal government’s incompetency, we are facing a shortfall of Rs229 billion during a global pandemic, Punjab is receiving Rs470-80 billion less, and other provinces are facing the same treatment at a time when the Centre should have supported the provinces,” he said.