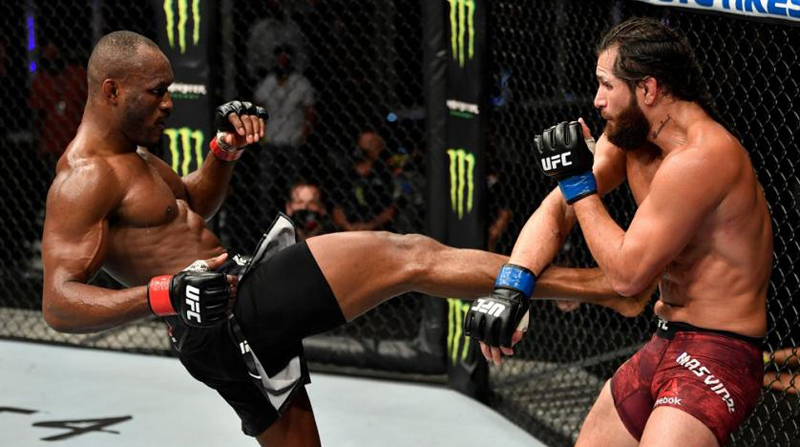 ABU DHABI: Kamaru Usman put on a ‘Fight Island’ masterclass Sunday to retain his Ultimate Fighting Championship welterweight world title by grinding down a brave Jorge Masvidal in Abu Dhabi. “I’m at the top of the mountain and everyone’s looking at me,” declared the 33-year-old Usman after scoring a unanimous points decision 50-45, 50-45 and 49-46 on the three judges’ cards. The Nigerian-American Usman (17-1) looked the fresher with Masvidal (35-14) having taken the UFC 251 headline bout at just six days’ notice when Brazil’s Gilbert Burns (19-3) tested positive for Covid-19 and was unable to travel.

The Las Vegas-based UFC pulled off a power-packed schedule with three world title fights to kick off a series of mixed martial arts cards. It helped fulfil supremo Dana White’s vision of a coronavirus-free ‘Fight Island’, something he first floated when the pandemic caused a global shutdown of sport in March. UFC has decamped to Abu Dhabi’s locked down Yas Island in the United Arab Emirates until the end of July to isolate fighters from the threat of the Covid-19 and ensure the shows roll on.

Strict protocols mean athletes and staff are tested twice before leaving for the UAE, and twice again on arrival, before spending 48 hours in quarantine — measures that caught out Usman’s original opponent Burns (19-3). Usman never gave the 35-year-old replacement Masvidal the space to land the combinations for which he is noted, and he monstered Cuban-American when the action hit the cage, and the canvas. “Gamebred (Masvidal) is the biggest, baddest dude out there right now and I had to take him,” said Usman. “I know a lot of noise was made about him preparing on short notice but all these guys are preparing for one guy and that’s me. “I’m just at a level better. I have more tools in the tool box and when I need to I can pull them out and use them.” The pair had exchanged heated words via social media in the lead-up to the event -– Masvidal claiming his opponent had “crossed lines” – and they were chipping away at each other in between rounds. But there were smiles at the end when the judges ruled overwhelmingly in favour of Usman with Masvidal, who was without his coach Mike Brown who had also tested positive for Covid-19, applauding his opponent.

Usman’s 12-0 UFC welterweight record is equalled only by future Hall of Famer Georges St-Pierre (26-2). The headline fight and the two other title fights delivered on the hype that had been built around the “Fight Island” showpiece. Australian featherweight world champion Alexander Volkanovski (22-1) edged the tightest of split decisions 48-47, 47-48, 48-47 in a thrilling rematch against former champion from Hawaii, Max Holloway (21-6). Brazil’s former three-time world champion Jose Aldo (28-7) was stopped in the fifth by relentless Russian Petr Yan (15-1) who claimed the vacant bantamweight crown.

The 27-year-old Yan rained in blows on his 33-year-old opponent for three minutes before the referee stepped in to save the veteran. Before those title fights came a brutal women’s strawweight rematch between America’s Rose Namajunas (10-4) and the Brazilian Jessica Andrade (20-8). Andrade had stripped the title from Namajunas in May 2019 by pile-driving her to the canvas for a knockout. This time the pair traded blows before the 28-year-old Namajunas, her face bloodied, edged a split decision 28-29, 29-28, 29-28. The 38-year-old Namajunas will now likely get a world title shot against champion Zhang Weili (21-1) from China, who took the title from Andrade 11 months ago.