Thermometers in hand, Dubai opens for tourists amid pandemic hoping to coax visitors back

* With travel uncertain and the coronavirus still striking nations, Dubai relies on for tourists, this city-state wants to begin coaxing people back to its beaches and its cavernous shopping 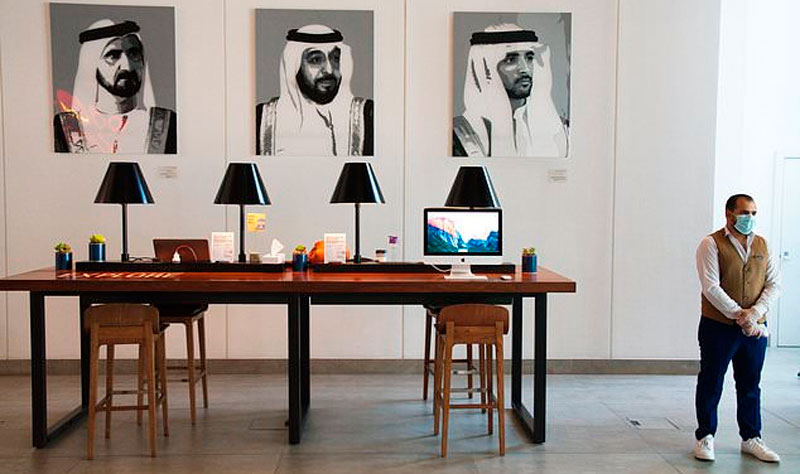 From French soccer jerseys to slick online campaigns, Dubai is trumpeting the fact that it has reopened for tourism today.

But what that means for this sheikhdom that relies on the dollars, pounds, rupees and yuan spent by travellers remains in question.

With travel uncertain and the coronavirus still striking nations Dubai relies on for tourists, this city-state wants to begin coaxing people back to its beaches and its cavernous shopping malls.

By instilling the idea that Dubai is safe, authorities likely hope to fuel interest in the sheikhdom ahead of its crucial tourist-heavy winter months.

But all that depends on controlling a virus that the United Arab Emirates as a whole continues to fight. Armed with thermometers, mandatory face masks and hand sanitiser, Dubai is wagering it is ready.

‘I think that will give people confidence – when they´re ready to travel – to come to Dubai,’ said Paul Bridger, the corporate director for operations at Dubai-based Rove Hotels.

‘It will take time to come back… We are expecting to be one of the first markets to be back because of the confidence that we can give to people that are travelling.’

That Dubai is a tourist destination at all is largely thanks to its ruler, Sheikh Mohammed bin Rashid Al Maktoum, who used the state-owned long-haul carrier Emirates to put this one-time pearling post on the map.

Attractions like the Burj Khalifa, the world’s tallest building, and the sail-shaped Burj Al-Arab luxury hotel draw transit passengers out of Dubai International Airport, the world’s busiest for international travel.

In 2019 alone, Dubai welcomed 16.7million international guests, up from 15.9million the year before, according to the Dubai Department of Tourism and Commerce Marketing.

The top seven tourist-sending nations were India, Saudi Arabia, the United Kingdom, Oman, China, Russia and the U.S. The city’s 741 hotels saw around 75 per cent occupancy for the year, with visitors staying on average three-and-a-half days.

Those travellers also fuel Dubai’s vast restaurant, bar and nightlife scene. Though drinking is illegal in the neighbouring emirate of Sharjah and the nations of Iran, Kuwait and Saudi Arabia, alcohol sales remain a crucial part of Dubai’s economy. 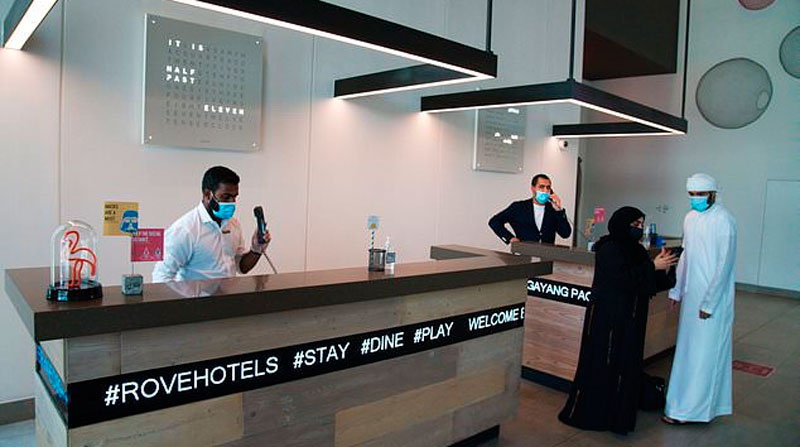 But even before the pandemic, lower global energy prices, a 30 per cent drop in the city´s real estate market value and trade war fears have led employers to shed staff. The virus outbreak accelerated those losses, especially as Dubai has postponed its Expo 2020, or world’s fair, to next year over the pandemic.

That makes reopening for tourism that much more important, even though Dubai’s top three tourist-feeding countries remain hard-hit by the virus, said Rabia Yasmeen, a consultant at the market-research firm Euromonitor International. Even retail sales are affected by tourism, with some 35 per cent of all revenue coming from tourists, she said. ‘It´s good for them to go ahead and announce because there needs to be a call for the confidence to come back,’ Yasmeen said. ‘Someone has to take that step first to show the world.’

And Dubai has, in typical headline-baiting fashion, taken those steps. French football club Olympique Lyonnais, under a sponsorship with Emirates, wore ‘Dubai Is Open’ jerseys at a recent match.

Dubai passport controllers have begun putting stickers on foreigners’ passports reading in English and Arabic: ‘A warm welcome to your second home.’ But there’s a risk, particularly in allowing more travel as the virus stalks other countries. Emirates stopped flying to Pakistan over virus fears.

Across the seven sheikhdoms that form the United Arab Emirates, there have been over 50,000 confirmed cases of the virus among the nine million people living here, with some 40,000 recoveries and 321 deaths.

At Rove Hotels, a new budget chain run by state-linked firms Emaar and Meraas, thermometer-carrying staffers check the temperature of everyone coming inside. Cleaners fog disinfectants over rooms and wipe down tables and chairs. Even a camel statue and an oversized stuffed animal wore a mask.

The chain, like others in Dubai, also has sought outside certification over its cleaning routines on top of fulfilling government regulations.

‘It’s kind of the icing on the cake to give people comfort that we´re following those standards,’ Bridger said.

There are still risks. In order to travel, tourists must take a Covid-19 test within 96 hours of their flight and show the airline a negative result. Otherwise, they will be tested on arrival and required to isolate while awaiting the results, which travellers say typically takes a few hours. Travellers must also have health insurance covering Covid-19 or sign a declaration agreeing to cover the costs of treatment and isolation. ‘A key question comes in: Is the traveller ready to come to Dubai?’ Yasmeen asked. ‘That’s a big question mark.’ Courtesy daily mail

By instilling the idea that Dubai is safe, authorities likely hope to fuel interest in the sheikhdom ahead of its crucial tourist-heavy winter months