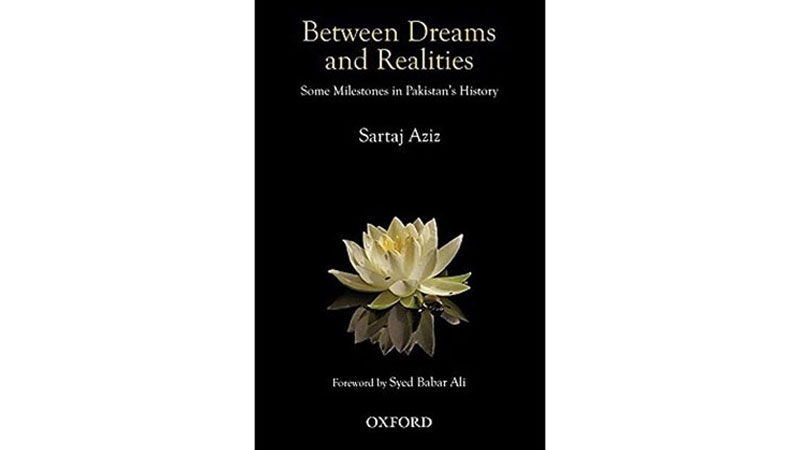 Oxford University Press (OUP) Pakistan hosted its first virtual book launch of the second edition of Sartaj Aziz’s book Between Dreams and Realities: Some Milestones in Pakistan’s History through its social media channels.

In this new edition, the author has included additional material to an already illuminating record of the watershed events marking the political history of Pakistan. This book demonstrates that only a genuine democratic dispensation can ensure Pakistan’s survival as a viable federation. Sartaj Aziz argues that the vitality of a nation comes primarily from the value system, cultural heritage, and social energy of its people. In this volume, Sartaj Aziz has covered Pakistan’s emergence from military rule during the two PPP governments of the Zardari Presidency. He describes Nawaz Sharif’s third term as an elected prime minister, his later disqualification, and the subsequent in-house change. In the last chapter, ‘Imran Khan as Prime Minister’, the author examines the performance of Imran Khan since the 2018 elections.

Sartaj Aziz is a development economist. He served twice as Finance Minister (August 1990-June 1993; February 1997-August 1998) and as Foreign Minister (August 1998-October 1999). As Finance Minister under Nawaz Sharif, he was the main architect of many of the far-reaching reforms introduced in the early 1990s and describes in the book the changing processes of public policy in Pakistan. As Foreign Minister during the Kargil crisis of 1999, he presents an authentic and insightful account of that unfortunate phase in Pakistan’s history.

In his concluding remarks, Arshad Saeed Husain, Managing Director, OUP Pakistan, thanked the speakers for their valuable contribution to the discourse on this well-written account offering an insider’s view of the national economy and political landscape of Pakistan.

Oxford University Press is a department of the University of Oxford. It furthers the University’s objective of excellence in research, scholarship, and education by publishing worldwide. OUP is the world’s largest university press with the widest global presence. It currently publishes thousands of new publications a year, has offices in around fifty countries, and employs some 6,000 people worldwide. It has become familiar to millions through a diverse publishing programme that includes scholarly works in all academic disciplines, school and college textbooks, children’s books, materials for teaching English as a foreign language, business books, dictionaries and reference books, and academic journals.