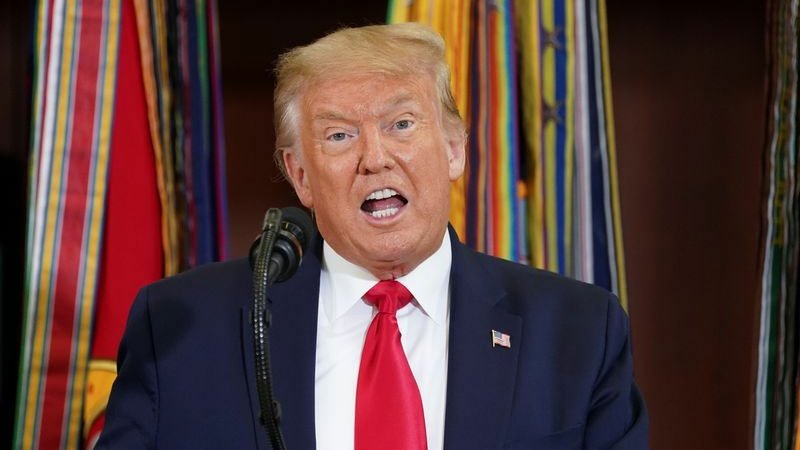 President Donald Trump’s demand for US schools to fully reopen this fall amid the coronavirus pandemic is central to an emerging re-election strategy that seeks to resuscitate his flagging support in the nation’s critical suburbs.

Trump in recent weeks has taken stances on hot-button issues his campaign hopes will appeal to suburban voters, particularly women, who have soured on the Republican president since his 2016 election and continue to move away as the virus rages across the country and the economy sputters.

Along with aggressively pushing for students to return to classrooms – “Schools must be open in the Fall,” he tweeted on Friday – Trump has warned of rising urban crime rates and threats to civil order in the wake of protests over racial injustice while pointing to the vibrant stock market as a marker of economic health.

The messaging amounts to a fresh effort to position Trump as the candidate of public safety and social and economic stability, several people close to the campaign said.

So far, there is little sign the approach is working. Trump trails his presumptive Democratic opponent in the Nov. 3 election, Joe Biden, in both national and battleground state polls.

Suburbs in key election states such as Pennsylvania, Wisconsin and Florida are filled with affluent swing voters, and many feature large, robust public school systems.

Shannon K. Alsop, a 39-year-old doctor and mother of two school-age children in prosperous Bucks County outside of Philadelphia, said Trump is politicizing the reopening of America’s schools because he believes it will benefit his campaign.

“At the end of the day, all of us parents just want our families to be safe,” Alsop said. “The question is, Can we open our schools and have them be safe? I want that decision to be founded in research and science. I don’t trust the president to make that call for us.”

Trump’s campaign views K-12 schools’ reopening as one key to an economic recovery, allowing working parents with young children to be more productive while addressing concerns that distance learning is harmful to some students.

“It’s about the economy. It’s about the education of their kids,” said Rick Gorka, a spokesman for the Trump campaign. “Parents are extremely frustrated.”

“TIME TO GET BACK TO NORMAL”

At a White House event on schools last week, Trump and Education Secretary Betsy DeVos advocated for their opening in contravention of the guidelines set forth by government public-health experts. The president has threatened to strip schools of federal funds if they fail to comply.

School districts across the country are taking a cautious approach to reopening as US COVID-19 cases reached the 3 million mark last week. Many districts plan to will offer a mix of in-person and online learning, and say they will require masks and social distancing on school grounds. Some parents are keen to see schools reopen.

Virginia Lee, 37, a registered nurse in Bucks County, said while she does not support Trump, she agrees with his push on schools. Her two school-age children learned little from the virtual instruction provided during shutdowns in the spring, she said.

“I don’t usually agree with anything about Trump. I do agree schools need to open back up,” Lee said. “It’s time to get back to normal.”

Bucks County split very narrowly in favor of Hillary Clinton in 2016, with the Democratic candidate winning by a 0.8 percentage point margin over Trump.

Biden’s position on reopening has largely been in line with that of the teachers’ unions that back his candidacy, which have criticized Trump’s demands as dangerous. The president of the American Federation of Teachers, Randi Weingarten, warned last week that a full reopening of schools could lead to an exodus of educators.

The former vice president also wants schools to reopen, Biden campaign spokesman Andrew Bates said, and has “laid out clear steps that would give schools the guidance, resources and support they need to do so.”

Joe Zepecki, a Democratic strategist and parent who lives in Shorewood, Wisconsin, a suburb of Milwaukee, said the issue is “coming up more and more” in his community but is too nuanced for Trump to gain traction.

“Parents absolutely want kids back in school, but it’s not a straightforward either-or dynamic. The concerns are many and varied,” Zepecki said. “The president is casting about for a resonant issue he can latch onto that is overwhelmingly popular and gets him back in the game. This ain’t it.”