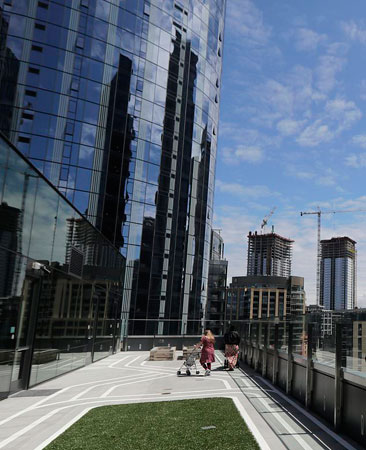 A homeless shelter built on Amazon´s perfectly manicured urban Seattle campus is a major civic contribution that pushes the company to face the crisis and criticism in the hometown it has rapidly transformed.

Believed to be the first homeless shelter built inside a corporate office building, Amazon´s partnership housing a local nonprofit could be seen as the company’s answer to criticism that it hasn´t given back enough to the city.

But as Mary´s Place settles into its new space after opening in March, the spotlight turns to the family homeless shelter as a symbol of the longstanding disparity that advocates insist large corporations help address. For Amazon, it’s a stark display of have-and-have-nots, given that some blame the tech giant´s explosive growth over the past decade for making living in Seattle too costly for a growing number of people.

When Amazon’s offices reopen post-pandemic, the tens of thousands of high-paid tech workers who helped drive up housing costs in the region will now share its pricey downtown neighborhood with vulnerable families who can´t afford any place to live.

Marty Hartman, executive director of Mary´s Place, said the shelter is a life-saving gift for the local community. The location near public transit is ideal, as is its proximity to Amazon workers who regularly volunteer and donate, she said.

“I think it´ll take everyone to help and contribute. Homelessness is a crisis that isn´t going away,” Hartman said.

Amazon estimates the new Mary´s Place building and ongoing utilities and maintenance will amount to a $100 million commitment to the homeless shelter program.

It´s among the largest homeless shelters in the state and the company´s single largest charitable contribution to its hometown.

The company has promised to host the shelter in the gleaming eight-story facility for as long as it´s needed.

Mary´s Place offers private rooms and is expected to house 1,000 people a year, while the other end is dedicated to Amazon´s cloud computing unit. The shelter shares the “Amazonia” aesthetic throughout: exposed pipes, citrus-colored walls popping against concrete floors, even signs inscribed in the tech giant´s signature office font.

Still, the shelter doesn’t erase the history of resentment over the wealth of Amazon CEO Jeff Bezos and its workers, which peaked after the company and other corporations successfully pressured the Seattle City Council to rescind a tax on large companies that would have funded homelessness services in 2018.

Months later, Bezos, the world´s richest man whose stake in the company he founded is now worth more than $160 billion, announced his long-awaited private charitable fund would tackle homelessness – an irony noted by locals and philanthropy scholars alike.

To date, the Bezos Day One Fund has given $196 million in grants to organizations working on family homelessness issues across the country.

He is also creating free preschools, though little else is known about the organization since Bezos first announced the $2 billion private philanthropy fund in 2018. An Amazon representative declined to comment on Bezos’ behalf.

Sara Rankin, a homeless rights advocate and lawyer who leads the Seattle-based Homeless Rights Advocacy Project, said Mary´s Place is a safe investment for Amazon because the nonprofit caters to the most sympathetic kind of homelessness. But Rankin said the shelter ultimately does not address the epicenter of the city´s homelessness crisis.

“It´s not bold and it´s not significant, at least with respect to the crisis,” she said. “It´s not as significant as it needs to be. It´s certainly not systemic.”

Amazon´s decision to take in Mary´s Place, which has multiple locations around the region, Rankin said, means the company is ignoring the chronically homeless who are often suffering from mental health or addiction issues, who are the most expensive and controversial demographic to address.

Companies like Amazon could virtually eliminate Seattle´s tent cities if they helped fund more permanent affordable housing with social services managers to support those struggling the most, Rankin said.

Amazon´s real estate chief John Schoettler said the partnership between the company and Mary’s Place began when Amazon´s massive expansion of office space led it to acquire a former Travelodge hotel. Amazon in 2016 gifted it to Mary´s Place for one year while the company prepared to demolish and construct an office building. It later decided to give the nonprofit half of the new building permanently.