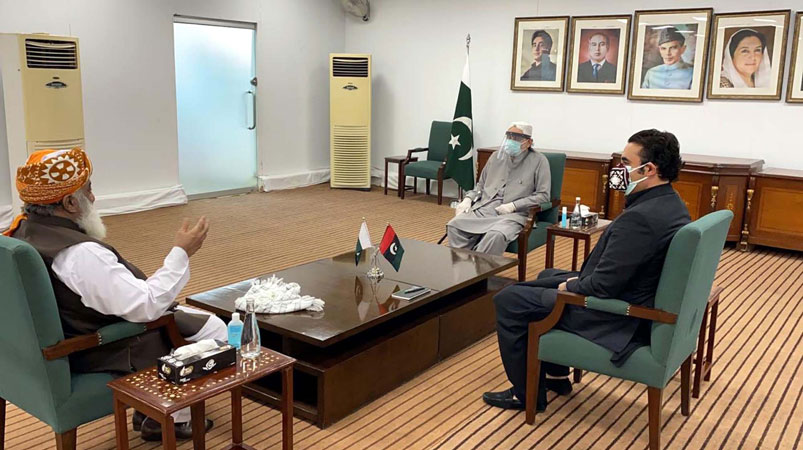 Pakistan People’s Party (PPP) and Jamiat Ulema-e-Islam-Fazl (JUI-F) on Friday agreed to continue with their inflexible stance on the 18th Amendment and the NFC Award, pledging to pursue political consensus for the country’s integrity and security.

JUI-F chief Maulana Fazalur Rehman called on former president Asif Ali Zardari and PPP Chairman Bilawal Bhutto Zardari at Bilawal House. They discussed the political situation of the country for about half an hour where Faz also inquired about the health of the former president.

Talking to the JUI-F leader, Zardari said that there would be no compromise on ‘anti-people budget’ and the NFC Award, adding that he has already predicted that Imran Khan is incapable and incompetent to govern the country. He further said that he had warned the government last year about the locust attack but the ruling party didn’t take that seriously due to ‘prejudice and stubbornness’. “There could be the worst food crisis in the country if locust attack is not repulsed,” he added.

Zardari observed that people are looking towards the opposition to get rid of a ‘selected’ government as ‘incompetence’ of Imran Khan has now been fully exposed due to mismanagement of Covid-19 crisis.

Speaking during the meeting, PPP Chairman Bilawal Bhutto Zardari pointed out that corruption has multiplied during Imran Khan’s regime but he is using NAB for victimization of opposition politicians only. He further said that two years have passed but Imran Khan has taken not a single step in the interest of the masses, adding that all the opposition parties are on one page against the ‘selected’ government.

Maulana Fazalur Rehman endorsed the stance of the PPP leadership and stated that PTI government has destroyed the country’s economy to the worst level. He said that growth rate of the country never went down into minus in the history, emphasizing that everyone has to challenge the ‘selected’ rulers to save the country and its economy.