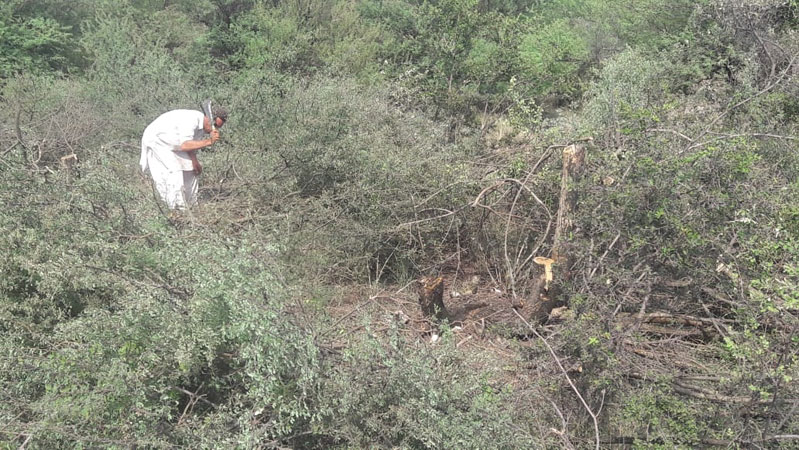 The government has started cutting trees in Chakwal district, contrary to its own slogan of planting more trees in the country. On the one hand, Prime Minister Imran Khan frequently touts ‘Billion Tree Tsunami’ project of the PTI government, and on the other hand already planted trees are being cut on the directives of the government machinery.

According to the details, a citizen has approached police department against the district administration over cutting of trees on a land managed by him in Chakwal district. Muhammad Bashir has filed a complaint with the in-charge of Balkasar Police Station, claiming that the trees are being cut from his land on the behest of the district administration. As per complaint filed with police, Bashir said that he is the manager of a piece of land situated near Dharabi Dam in Balkasar area of Chakwal district. The Tourism Development Corporation of Punjab (TDCP) has acquired 54 kanals of land that was already mortgaged with the Silk Bank without any payment to his company, the complainant said, and questioned whether the TDCP had got any NOC from the Silk Bank before acquiring the land.

“Some people were cutting the trees when I visited the land the other day. An executive engineer of the Buildings Department named Imran also reached the site when I stopped them from cutting the trees,” said Bashir. “The engineer asked me to contact Chakwal deputy commissioner as the trees are being cut on his directives,” the complainant said, and requested the police to take action and immediately halt cutting of the trees from the said land.

It has been learnt that the trees are being cut on the behest of Chakwal DC, TDCP and the Buildings Department. The said land is situated at a prime location near the Dharabi Dam and the TDCP reportedly wants to use it for commercial purposes.

This entire episode exposes a huge difference in PTI government’s tall claims and the situation on the ground. Prime Minister Imran Khan frequently claims that the government is going to plant 10 billion trees as part of its ‘Billion Tree Tsunami’ project to improve environment and expand forest cover in the country. The prime minister has also maintained at multiple occasions that tree plantation should be taught to children in schools in order to sensitize the people about looming threat of climate change and global warming.

It is worth mentioning here that Pakistan is a country with one of the highest deforestation rates in the world, thanks to politically backed timber mafia who plays a key role in urbanization and industrialization in the country.

The opposition has also time and again pointed the finger at the ‘Billion Tree Tsunami’ project launched by the PTI government. A resolution was submitted in the Punjab Assembly on Friday demanding an inquiry into the project. “This House demands from the government to hold a transparent inquiry into billion tree project. Billions of rupees were spent on the project but it didn’t yield desired results,” PML-N MPA Sumaira Komal said in the resolution, demanding that a comprehensive inquiry within three months be conducted and action be taken against those found responsible.