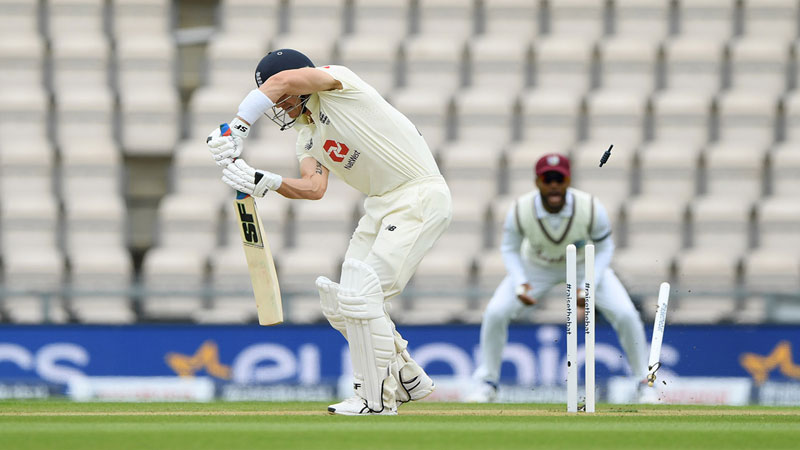 SOUTHAMPTON: After a rain-curtailed day one of the first Test between England and West Indies at Southampton, fans were in for a treat on Thursday as finally cricket of substantial proportions was played between the two sides. The visitors clearly dominated the days proceedings as they ended day two with 57-1, just 147 runs behind England 204. The day began with England at 35-1. One would have expected the hosts to put a good show with the bat in familiar conditions, but to total surprise were blown away by the Windies pace attack.

To start things off, Joe Denly was the first casualty of the morning after Shannon Gabriel hit the timber, after only 13 runs were added to the overnight score. Soon after to depart was Rory Burns (30), who misread a yorker from Gabriel, and was trapped in front of the wickets. What happened after that was a masterclass from Windies skipper Jason Holder. He swung the ball late, with vicious bounce to record his career-best figures of 6-42. He just didn’t give an inch to any batsman he bowled to. When Ben Stokes and Jos Buttler, during their stand of 70 runs, were trying to repair the English innings, Holder stood between them and removed them both in quick succession of each other. Both were caught behind by Dorwich.

With this Holder completed his seventh fifer in Tests, and stamped his authority as best all-rounder in the Test arena. To wrap up the innings, Gabriel removed the last man ––- James Anderson for 10, not before he strung a crucial partnership with Dominic Bess, of 30 runs. Throughout the innings, England struggled to get partnerships going, but that wasn’t the case when the Windies came out to bat, in rather tricky conditions. John Campbell attacked the bowler right from the word go and smashed 28 from 36 balls. That might look like a low score, but a quick innings is what the visitors needed to get going. He added 43 runs for the first wicket along with Kraigg Brathwaite. Soon after the first wicket fell, the match was stopped due to bad light.