Educational institutions to reopen from Sept 15 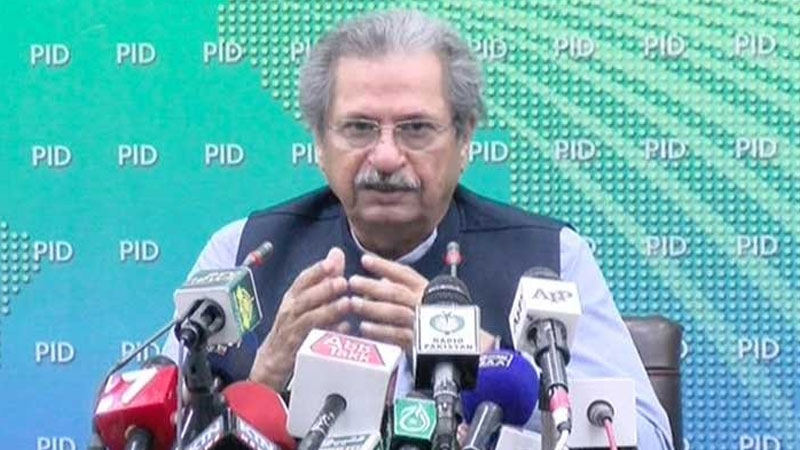 After getting final nod from the National Coordination Committee (NCC), the government on Thursday announced to reopen educational institutions across country from September 15 under strict guidelines.

Minister for Federal Education and Professional Training Shafqat Mahmood said that educational institutions will formally re-open on September 15 as all stakeholders have developed a consensus after thorough deliberations and consultation on the issue. He said the federal government will have initial reviews of health parameters in the first and third week of August prior to the formal re-opening of educational institutions after months-long closure in the wake of Covid-19 pandemic.

The minister said the final review will be carried out in the first week of September by assessing the overall situation of the pandemic in the country. In case the current pandemic situation does not improve, the educational institutions will not open from September 15, he added.

The minister pointed out that all decisions were taken unanimously at the Inter-Provincial Education Ministers Conference on Wednesday in consultation with the stakeholders. He said that the educational institutions including madaris, public and private sector schools, colleges and universities will open step-wise from September 15 under strict standard operating procedures (SOPs). The provinces had given different suggestions regarding formulation of SOPs, he said, adding that they have been asked to forward their written SOPs that will be finalized by the Federation.

Briefing about the decisions taken at IPEMC meeting for opening of educational institutions, Shafqat said that universities, colleges and schools are being given permission to open their administration offices for cleanliness and providing training to their teachers to ensure implementation of SOPs. The federal government in this regard has given formal permission and now the decisions will be taken by the educational institutions in consultation with the provincial governments, he added.

The minister stated that universities are being given permission to call PhD-level students or those who want to carry put their research work or work in laboratories before September 15. “The universities have also been given permission to bring the students of far-flung areas in hostels to minimize their study loss due to Covid-19 as they are unable to join online classes due to unavailability or poor internet facility in their areas,” he added.

The universities are bound to bring only 30 percent of such students in hostels. These students will be called after Eid ul Azha under strict SOPs. The health check will be mandatory for such students and the teaching faculty that will attend universities before September 15, he remarked. The provinces, he said, will ensure the implementation of their SOPs in the private as well as public educational institutions.

Shafqat said all kind of educational institutions and recruitment institutions have been allowed to conduct their exams within two to five days. The universities have also been permitted to conduct admission exams under strict SOPs including six-foot distance, ensuring wearing of mask and the exams should be conducted in open air if possible, he said.

About the vocational and technical training institutions, the minister said that those students who are getting on-job training will be allowed to continue their training in industries, while the students who are getting training in classrooms, can only attend their training from opening of educational institutions on September 15. He said the vocational institutions have also been given permission to call their teaching staff before September 15 for training regarding SOPs. The government had ordered the closure of schools and other educational institutions in mid-March, after the first cases of the novel coronavirus were detected in the country. All examinations had been suspended as well. In order to continue academic activities in the country and mitigate the loss of students, the federal ministry had launched a national broadcast education channel in April.