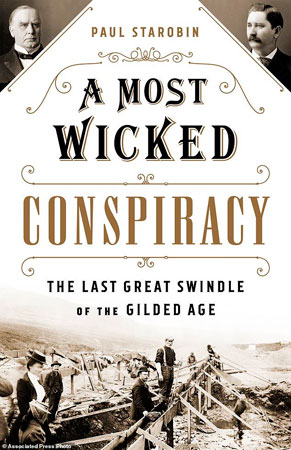 Rules, laws and honesty meant little to Alexander McKenzie, a Gilded Age political boss in North Dakota who chummed around with deep-pocketed capitalists and U.S. senators. After gold was discovered in the territory of Alaska at the end of the 19th century, he involved them in his brazen scheme to plunder gold already claimed by miners by secretly rigging the justice system. Starobin tells a jaunty tale of jaw-dropping greed at the dawn of the 20th century. The complex scheme to grab the gold involved political appointments and back-room deals, but boiled down to having a federal judge in Alaska appoint McKenzie as receiver to a series of contested gold mine claims. Miners fighting off the claim jumpers were unaware that McKenzie had secretly engineered the appointment of the crooked judge, who did his bidding. Receivers are supposed to safeguard disputed assets, but McKenzie wanted to use the legal proceedings to make sure the gold was extracted for himself and his co-conspirators. He even made a play for Alaska´s beaches, which were common areas open to anyone who wanted to sift for gold dust in the surf.