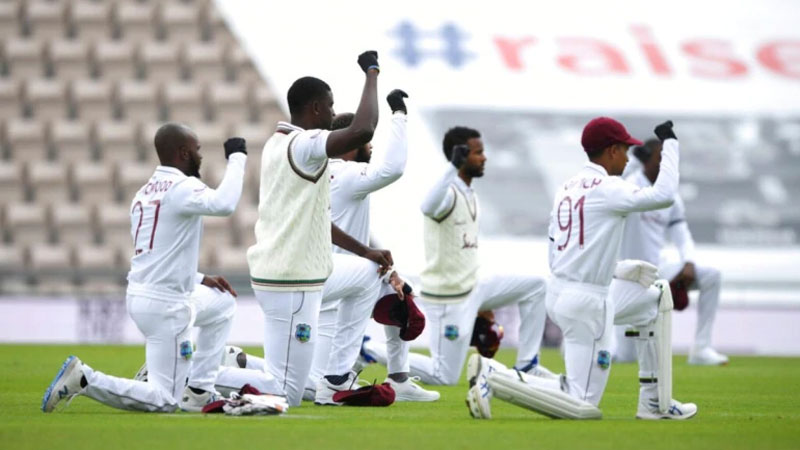 SOUTHAMPTON: England and West Indies players took a knee for 30 seconds in the lead up to the 1st Test between the two sides at the Ageas Bowl in Southampton on Wednesday, July 8. The two sides showed combined support to the Black Lives Matter movement. The West Indies players along with the two England openers led the gesture as players part of both sides took a knee after the toss that was delayed due to rain. The other members of the squad were spotted taking a knee from along the boundary line. The two teams also observed a minute’s silence to mark the victims of the novel coronavirus pandemic and former West Indies batsman Everton Weekes, who died aged 95 last week. Both England and West Indies players are sporting Black Lives Matter logo on their Test kits in Southampton. The BLM logo that is being used in the Premier League was designed by Alisha Hosannah, the partner of Watford football club captain Troy Deeney. The logo has been approved for use by the International Cricket Council and both the Cricket West Indies and England and Wales Cricket Board got permission to use the logo on their shirts.

The death of an African-American man, George Floyd in police custody in the United States triggered protests across the globe against racism. The Black Lives Matter movement has garnered a lot of support over the last few weeks and the sporting fraternity has backed the campaign with their on-field support.