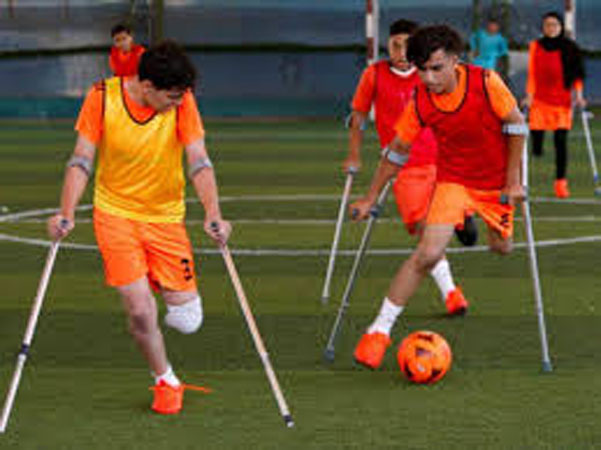 GAZA: Young Palestinian soccer players, all amputees and many on crutches, were back on the field in Gaza on Tuesday for the first time since coronavirus restrictions were eased in the territory. Their coach said some of the 26 athletes lost limbs to Israeli gunfire in Gaza, where Hamas, the ruling Islamist militant group, and Israel have fought three wars since 2008. “We are now back on the field. We are training and keen to play in the league,” said Mai Al-Yazji, 14, referring to an amputee teams’ tournament for boys and girls under the age of 16. Its borders tightly controlled by Israel and Egypt, Gaza has reported 72 coronavirus infections and one death from the respiratory disease. The Mediterranean coastal enclave has around two million inhabitants, many of them impoverished.

Gaza health authorities recently allowed sports clubs, gyms, mosques, restaurants and event halls to resume operations. About 80 adult amputees compete in their own soccer league. Many of them were injured in the conflict with Israel, according to the Palestine Amputee Football Association in Gaza. The association sponsors the league in partnership with the International Committee of the Red Cross, and the ICRC also provides uniforms and crutches.

“We are very happy we are restarting the amputee football activity, training and competitions,” said Ignacio Casares, the ICRC office director in Gaza. “Make no mistake, they are athletes, they have special abilities and they are somehow special as well as persons,” he said. Fouad Abu Ghalyoun, chairman of the Palestine Amputee Football Association, said the partnership with the ICRC helped in the amputees’ rehabilitation and re-engagement with the community.