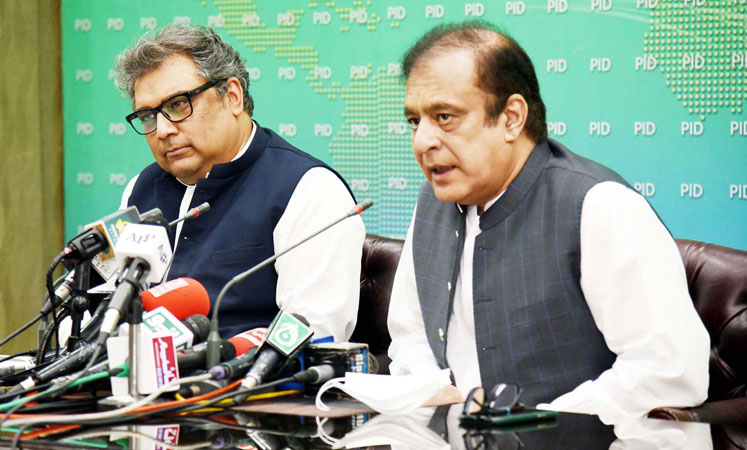 Addressing a joint press conference with Federal Minister for Information and Broadcasting Shibli Faraz, he said that everyone has seen how Karachi has been systematically destroyed by the PPP. “Sindh Assembly’s contribution to Pakistan has been phenomenal. But PPP destroyed the biggest city of the province with unimaginable bloodshed,” he said, adding that PPP’s propagated version of JIT report was unsigned. “The JIT report with signatures of ISI, IB and other officials directly implicated PPP’s leaders for abetting and using Uzair Baloch,” he said. “Uzair Baloch’s gang used to behead rival gangsters and throw away their heads, this is not made-up or a story from Mexico, this was happening within Karachi, my city,” he added.

Zaidi, presenting what he called was the ‘original’ JIT report on Uzair Baloch, said that the gang leader had confessed that he met (then) Sindh chief minister Qaim Ali Shah and Faryal Talpur, sister of former president Asif Ali Zardari, and asked that the head money against him be removed. Baloch allegedly said the head money was withdrawn on Talpur and Zardari’s order. “On the last page, Baloch said that he feared they would kill him after these revelations and that Zardari and other political figures might take revenge and asked for protection.”

Zaidi said that Sindh High Court ordered JIT reports on Uzair Baloch and Baldia Factory fire to be made public but Sindh government did not do so. “I approached SHC again for contempt of court case, and the next day PPP went to SC with an appeal,” he added.

The minister said that a known target killer involved in all sorts of criminal activities, according to JIT, was involved in police transfers. “As a citizen of Karachi, should that not affect me that my area SHO was sheltering a criminal like Uzair Baloch,” he asked. “Uzair Baloch confessed that his life and his family is in danger from Asif Zardari and PPP. I did everything at the behest of PPP leadership.” He also showed a video about PPP and Uzair Baloch alliance in politics.

The Uzair Baloch JIT had six people – one person each from the Special Branch and the Crime Investigation Department, from the Sindh government, as well as officials from the Intelligence Bureau, Rangers, Inter-Services Intelligence and MI, from the federal government, he said. “All four people from federal government have signed each page of this report, but those from Sindh government have not. What really happened? The reports were made and they made major discoveries.”

Minister for Information and Broadcasting Senator Shibli Faraz said that the Pakistan Tehrik-e-Insaf government believes in bringing facts in the knowledge of people of the country. He said that Ali Haider Zaidi also knocked the door of the court for release of joint investigation team reports of Uzair Baloch, Nisar Morai and Baldia factory fire tragedy. He said that Ali Zaidi also raised the matter in the National Assembly because the PTI believes that the objective of forming the JITs was to tell the people facts about the cases. He said that the PTI wants to rid the people of Sindh of those who supported gangs.

He said that Sindh is the land of Lal Shahbaz Qalandar and Abdul Latif Bhitai, but unfortunately a political party in power there damaged the interest of the province and instead of ensuring rule of law, it behaved in a manner as if the province was their personal property.