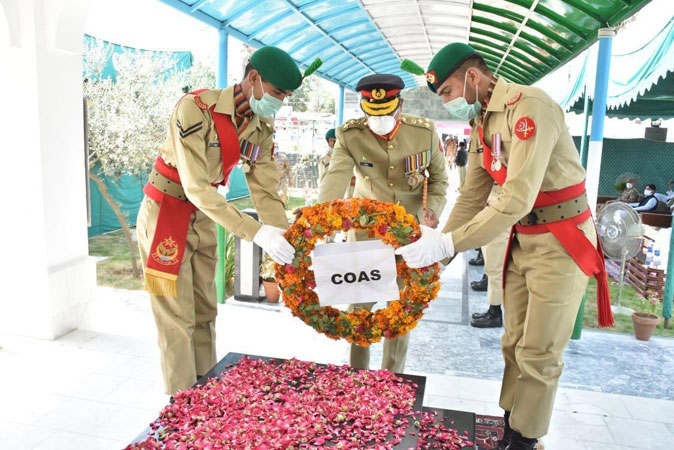 The wreath laying ceremonies were held to pay homage to supreme sacrifices of valiant sons of the soil in the line of duty to safeguard Pakistan’s territorial integrity and sovereignty, said Inter-Services Public Relations (ISPR).

People from various walks of lives, civil and military officials and relatives of the martyrs attended the ceremonies.

During the Kargil war, Captain Karnal Sher Khan was deployed at the Gultari region. He along with his fellow soldiers established five strategic posts at the height of 17,000 feet at Gultari. Indian Army launched eight attacks on their position to capture the strategic posts. However, Khan and his men were able to defend those strategic posts.

On July 7, 1999, the Indian army launched another attack and surrounded his posts with two battalions. With heavy mortar fire, the Indian Army captured one of his posts. Khan personally led a successful counter-attack and was able to re-capture the lost post. Despite shortage of ammunition and men, Khan was successful in forcing the enemy to retreat. During the battle, he was hit by machine gun fire but still continued ferociously fighting along with his soldiers and achieving his objectives. Later during the battle, Sher Khan succumbed to his injuries and embraced martyrdom. 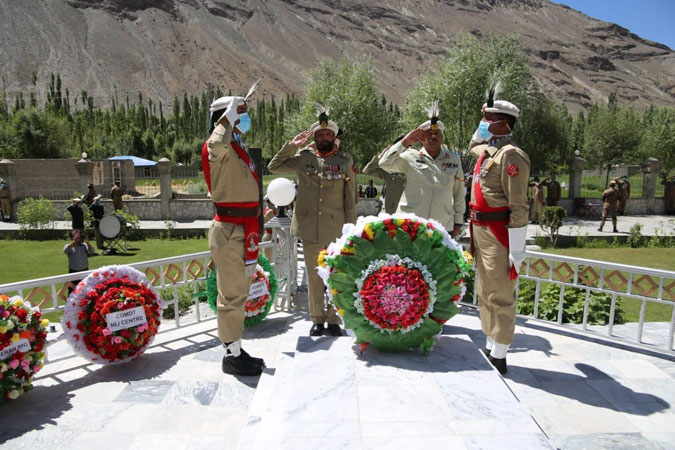 Indian Army’s Brigadier (R) MPS Bajwa, who was commanding the Indian Army 192 Mountain Brigade at that time, in an interview to Indian media also praised Captain Sher Khan for his valour, courage and gallantry expressed while fighting the enemy troops. Before dispatching the body to Delhi, he informed his General Officer Commanding of Khan’s bravery and expressed the desire to write a small letter of appreciation and citation – that Captain Khan had fought very bravely and must be given his due recognition, reported The Print of India.

Havaldar Lalak Jan Shaheed was serving in Northern Light Infantry Regiment when skirmishes broke out in Kargil in 1999. He fought from the forefront to thwart heavy Indian attacks. He volunteered himself to be deployed on the front positions located at the jagged peak in May 1999. Havildar Lalak Jan repulsed back many aggressive ventures by the enemy and imposed colossal losses on them. On July 7, 1999, he sustained serious injuries as enemies pounded the area with heavy mortar shells. But despite being injured, he retained his position and frustrated the Indian assault.

Due to severe injuries he embraced martyrdom and was graciously awarded The Nishan-e-Haider for his bravery and his will to attack and defeat the enemy at all costs.